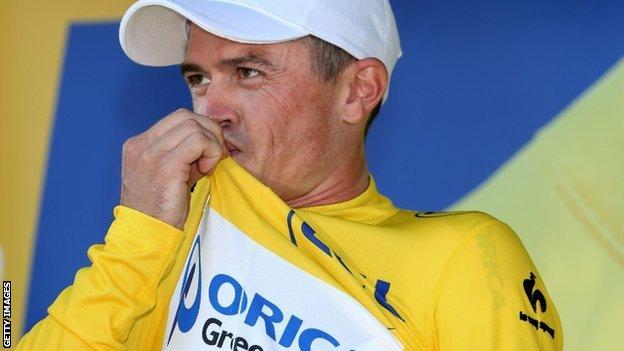 Orica GreenEdge rode the 25km course in Nice in 25 minutes 56 seconds to edge Mark Cavendish's Omega Pharma-QuickStep outfit by 0.75 of a second.

Britain's Team Sky, including Geraint Thomas, who is riding with a broken pelvis, were three seconds adrift.

"It's the pinnacle of the sport," said Gerrans, 33, the stage three winner.

Despite being in pain because of his injury, Thomas took his turn at the front and stayed with his team-mates until the final kilometre.

"My race was to get to the promenade after a kilometre and then when I made it there with the team I was buzzing off that and managed to give it what I had," he said afterwards.

"I was shouting at a lot of my team-mates at the end, we just had to give it everything, we were all full gas trying to encourage each other at the end, and I think we can be proud of that."

A Team Sky win would have put Norway's Edvald Boasson Hagen, their highest ranked rider, into yellow but the day still went well for their British leader Chris Froome.

The pre-race favourite gained time on his main rivals in the general classification - making six seconds on Spain's Alberto Contador and 23 seconds on Australia's Cadel Evans.

Froome, who rode strongly in the closing stages, moved up to seventh overall and sits three seconds behind Gerrans - who is not considered a Tour contender - without having the pressure of defending the yellow jersey so early in the race.

"If we were in the yellow jersey it would mean that on Wednesday, and the next couple of days, which are predominantly flat, we would do a lot of work which I think would be a bit of unnecessary extra work at the moment for such a small advantage," Froome explained.

"Personally I felt really good, I was able to do longer pulls on the front. I'm feeling like I'm coming into good form before the mountains."

"In terms of the overall race, this was the perfect result for Team Sky, with Chris Froome gaining time on all of his rivals. He has not made massive time gaps but they are still significant and you never know what the race will come down to at the end of the three weeks.

"The result was pretty close because they have kept the distance short, which is the right thing - it is exciting to watch but, also, the Tour is an individual event so I have always thought it is a little bit unfair that a long-distance team time trial could cost a contender two or three minutes and kill his chances if he is not in the best team.

"It was great to see Geraint Thomas riding so well despite his injury. He did not just stay in touch, he helped out and did a significant turn at the front towards the end of the route on the Promenade des Anglais. A 100% fit Geraint might have made the difference that saw Team Sky win the stage, but we will never know for sure."

Froome did not want the yellow jersey but, with 71 of the 195 remaining riders only a second behind race leader Jan Bakelants at the start of the day, several riders were eyeing that prize.

Garmin-Sharp, winners of the team time trial when it was last held in the Tour in 2011, were again among the favourites and set off with high hopes of placing Britain's David Millar in the yellow jersey.

But they could only finish sixth, 17 seconds behind Orica, and Millar blamed himself.

"I wasn't in good form but the team was very, very strong,'' the 36-year-old Millar said. "I think it was me who was missing the seconds."

Cavendish's Omega Pharma-QuickStep came closest to victory. The Manxman has been suffering from bronchitis and completed a course of antibiotics on Sunday, but he showed no ill-effects as helped his team set a time that led the way for much of the day.

Cavendish will hope for an individual win of his own on Wednesday, with stage five following a 219km route from Cagnes-Sur-Mer to Marseille that contains no major climbs and offers him a chance for his first stage win of this year's Tour.

For now, however, it is Orica and Gerrans who are celebrating.

Following Gerrans's dramatic individual stage win on Monday, Orica's latest success means they continue to make the headlines for the right reasons following the embarrassment of seeing their team bus get stuck under the finish gantry on Saturday's opening stage.

Gerrans, 33, took the overall lead from Belgian rider Bakelants and leads the standings ahead of team-mates Daryl Impey of South Africa and Michael Albasini of Switzerland.

"I couldn't have imagined this would happen. It's a dream for me, my team and a lot of people in Australia as well," said Gerrans.

"My first coach was Phil Anderson, who was the first Australian to wear the yellow jersey. So to do that as well is something special.

"I knew there were some special stages for me in the first week. It's a huge satisfaction to win the stage and take the yellow jersey. We'll try and hold it for a couple of days now."