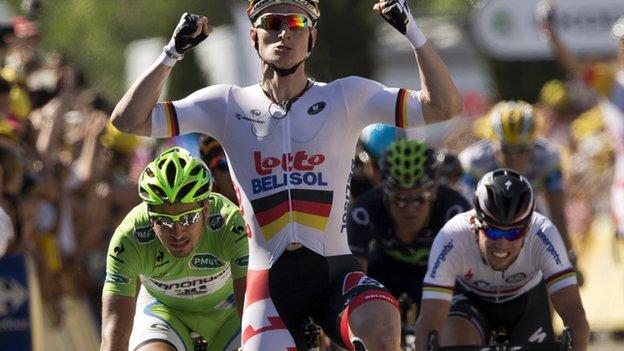 Greipel beat points leader Peter Sagan of Slovakia and fellow German Marcel Kittel in the dash for the line.

Briton Cavendish, who won stage five, worked hard to catch the pack after crashing with 34km left of the race from Aix-en-Provence to Montpellier.

The South African's 14th place finish on the stage was enough for him to grab the overall lead from Orica GreenEdge team-mate Simon Gerrans.

"This is a special day, a dream come true for me and the whole South African community," said Impey.

"Cavendish didn't appear to be too happy at the end of the stage.

"His team-mate Peter Velits helped bring him back up through the peloton and to the front of the race after his crash while Sylvain Chavanel had gone to the front to try and slow the race down.

"But I was surprised that none of his team-mates dropped back to help when he was having to come through the cars. They have radios so I would have thought somebody would have helped because he was more than 30 seconds adrift at one point.

"That chase was a lot harder than a lot of people thought and a crash does take the wind out of you.

"Talking of wind - it didn't blow as hard as predicted but there were a lot of nervous teams out there trying to protect their lead riders.

"The speed of the peloton was a bit higher than usual because everyone was trying to stay at the front - they were worried in case a big side wind caused a split in the race which could have seen some of the main riders lose time."

"Simon got in the jersey because he won stage three (although he did not take over as race leader until after Orica GreenEdge won the team time trial on stage four) but it's been in my reach and seeing him lead me out today shows what a great rider he is.

"He could easily have sat on the wheel and kept the yellow. I was the last man to lead out Matt Goss for the sprint and that left me in a good spot."

Cavendish won a sprint in Montpellier the last time the southern French city hosted a stage finish in 2011.

However, the Isle of Man rider was involved in a crash towards the end of the 176.5km stage and without a team-mate to help pace him back to the peloton, he was forced to weave in and out of the support cars and bunny-hop over a roundabout.

"I was coming into the roundabout," Cavendish said. "It was tight, my front wheel went and I ended up in the road. There was no other vehicle involved.

"It wasn't necessarily a factor in me losing the sprint but it did take a lot of energy to get back on. Andre's a great sprinter, I'm very disappointed."

Sagan also had to chase back to the peloton after stopping to change both his wheels with 46km remaining. The Cannondale rider was pulled along by Greipel's slipstream as he finished a bike length behind in second place.

"I told the guys to wait as long as possible and everybody to stay together," said the German, who rides for Lotto Belisol.

"We hit the front with 2km to go and I think people can see we have some horsepower. I'm really proud of this team."

Sagan continues to lead the points classification on 159, with Greipel second on 130, while Cavendish is third on 119.

A nervous peloton had left Aix-en-Provence with local weather forecasts predicting that the Mistral wind, common in the south of France, would blow and the riders would have to cope with gusts of 60-70km/h.

An early solo breakaway attempt by Spaniard Luis Mate was brought back after 44km and the peloton rode together throughout the rest of the stage, although the wind did not prove to be too big a factor.

Team Sky leader Froome remains seventh overall, eight seconds off the lead but six clear of Contador and 23 ahead of Evans.

Froome's team-mate Edvald Boasson Hagen finished 12th on the stage to move up to second in the overall standings.

Astana team leader Janez Brajkovic was one of three riders to abandon the race on Thursday. Slovenian Brajkovic needed stitches in a knee injury after crashing while his Swedish team-mate Fredrik Kessiakoff and France's FDJ rider Nacer Bouhanni also pulled out of the Tour.