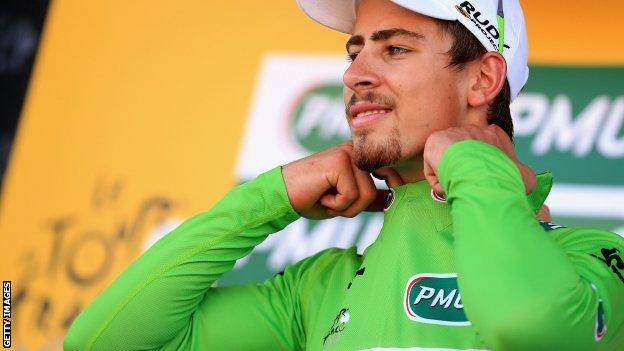 Britain's Mark Cavendish saw his chances of winning the green jersey suffer a blow as he was part of a group dropped on the second climb of the day.

Slovak Sagan, last year's points winner, won by a bike length in Albi to take his first stage of the 2013 Tour.

Chris Froome finished in the peloton as Daryl Impey retained the yellow jersey.

With no real change in the overall race standings, Friday's 205.5km race from Montpellier was all about the points jersey.

Sagan picked up 45 points for the stage win, to add to the maximum 20 he collected for winning the intermediate sprint, to move onto 224 points, a lead of 94 over Germany's Andre Greipel, while Cavendish is third on 119.

A two-man break, instigated by the oldest man in the peloton, 41-year-old German Jens Voigt and featuring local favourite Blel Kadri, led the race over two of the day's four climbs before succumbing to the pace of Cannondale.

Sagan's Cannondale team-mates pushed hard on the toughest climb of the day, the category two Col de la Croix de Mounis 90km into the stage, in an effort to distance sprinters Cavendish and Greipel, who have both won on this year's Tour.

"A race is never over until it is over but it will be almost impossible to dislodge Peter Sagan from the green points jersey now.

"He has a big lead after his Cannondale team perfectly executed their plan.

"I did think it was 50/50 as to which way the race would go and a lot of sprinters, including Mark Cavendish and his team, were confident the stage would end with a bunch sprint in Albi.

"It was great to see Jens Voigt instigate the two-man break and once it went away it looked like they would get over the hills before being reeled back in for a big bunch sprint.

"But Cannondale set the pace high on the category two climb, got rid of the sprinters and then delivered Sagan to the line. It is rare to see that sort of thing in today's racing and they pulled it off perfectly. "

The tactic worked handsomely, with Greipel losing two minutes on the climb and Cavendish three.

The duo's respective Lotto Belisol and Omega Pharma-Quickstep teams came together to try to chase down the Cannondale-led peloton but eventually called a truce with around 40km of the stage remaining.

Cavendish, who won the green jersey in 2011, tweeted: "Well, one of the "maybe a sprint" days definitely wasn't! Finished with about 80 riders after @opqscyclingteam did some gutsy chasing."

Sagan still had to finish off the sprint in Albi and he almost ruined the good work of his team-mates when he ran wide at a roundabout in the closing kilometres.

However, he regained his composure and emerged from Degenkolb's slipstream in the final metres to take the win, with German rider Degenkolb holding off the challenge of Italy's Daniele Benatti.

"The original idea was to win the intermediate sprint but my team-mates came up to me and said we should persist because the sprinters were dropped.

"I have got more points than I thought but the Tour has only just started - there are still 14 stages left."

The race now heads into the Pyrenees and race leader Impey is already resigned to losing the race leader's yellow jersey on Saturday.

"I'd be overambitious to say that I thought I'd keep this jersey," said the South African, who is not known as a climber. "Guys like Froome, I can see them really putting the pressure on.

"It's the first day in the mountains and I can't see why they wouldn't want to test each other. They've been waiting seven days to see how everyone is going so I think it'll be pretty hard to keep the yellow."

With Wiggins unable to defend his title because of illness and injury, Froome is favourite to become the second British winner of the race and he will start Saturday's stage eight seconds adrift of Impey.

Froome is six seconds clear of Alberto Contador, his main rival for the overall victory.

Saturday's 194km race - from Castres to Ax 3 Domaines - contains two mountain ascents and a summit finish at the ski station and the riders who have ambitions of winning the race are expected to come to the fore.

49 comments
Back to top
unknown