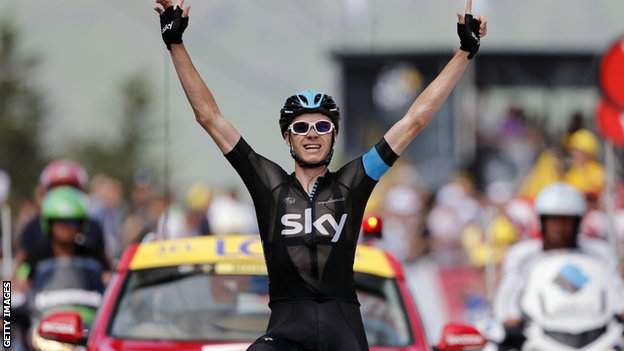 The Briton sprinted away from his main rivals, including Alberto Contador, on the final climb to the summit finish at Ax 3 Domaines in the Pyrenees.

He beat Richie Porte by 51 seconds and leads his Team Sky team-mate by the same margin in the overall standings.

Contador lost one minute, 45 seconds to Froome and is seventh, 1'51" down.

"It has been a nervous week leading up to now but my team has done a fantastic job and to repay my team-mates with a stage win and Richie coming second, I couldn't have asked for more."

South Africa's Daryl Impey started the day in the yellow jersey but the Orica GreenEdge rider, who is more of a sprinter than a climber, knew he would be losing the race lead on Saturday's first day in the mountains.

He suggested that Froome would be one of the riders to keep an eye on and the race favourite, who finished second behind Sir Bradley Wiggins last year, did not disappoint.

The first 120km of racing was reasonably flat and calm with a four-man breakaway - which included Christophe Riblon, who won a similar race to Ax 3 Domaines in the 2010 Tour - opening up a lead of more than nine minutes at one point.

However, the lead was slowly whittled away and was down to around one minute by the time the leaders had reached the bottom of the day's biggest climb - the hors categorie Col de Pailheres.

Riblon made a solo bid for the stage win on the ascent, while Team Sky controlled the pace of the peloton.

Several riders, including France's Tommy Voeckler, who won the 2012 King of the Mountains classification, and Dutch climber Robert Gesink also made solo breaks but they were soon caught and overtaken by Colombia's Nairo Quintana.

The Movistar rider then chased down Riblon and was first over the summit of the 2,001m-high Col de Pailheres to win the souvenir Henri Desgrange - the prize awarded to the first rider to reach the highest point of the overall race.

Team Sky's Peter Kennaugh took over the pacing duties towards the top of the climb and led the peloton on the descent, chipping away more than 30 seconds of the one minute advantage that Quintana had built up.

The Isle of Man rider then set a furious pace up the final 7.8km ascent to Ax 3 Domaines - so furious that he ran out of energy and was forced to drop away with around 6km remaining.

That left just Porte to pace Froome and the duo upped the tempo, catching and passing Quintana in the next kilometre before Froome took off on his own to record a memorable victory.

Not only did Froome beat the likes of two-time Tour winner Contador and Quintana by one minute, 45 seconds, he also put more than four minutes into 2011 champion Cadel Evans.

Alejandro Valverde, who was third on the stage, lost 1'08" but is third overall, 1'25" behind Froome.

Slovakia's Peter Sagan picked up 10 points in the green points jersey classification after finishing behind Andre Greipel in the day's intermediate sprint, which came just before the mountain ascents.

With the four riders in the breakaway claiming the big points on offer, German Greipel won the race from the peloton to claim 11 points, with the Isle of Man's Mark Cavendish getting nine points.

Sunday's stage nine is a second and final day in the Pyrenees. The 165km race starts in Saint-Giron and features four category one mountain climbs and one category two ascent but finishes with a descent into Bagneres-de-Bigorre.