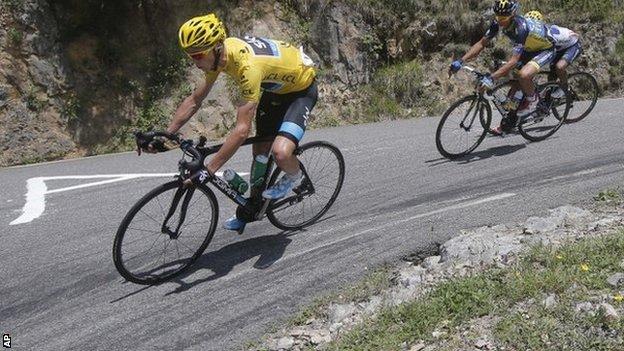 Briton Chris Froome survived a series of attacks to retain the leader's yellow jersey after a punishing stage nine of the Tour de France.

It was won by Ireland's Dan Martin, who outsprinted Jakob Fuglsang after the two men made a late breakaway.

But the main drama focused on Team Sky's Froome, who lost all of his team-mates early in the day, including Richie Porte, who started in second.

"After Saturday's stage it was a bit of a surprise that Team Sky were so bad. Richie Porte should not be getting dropped so early in the race because they were not the biggest of mountains today.

"I can see that maybe one or two riders were feeling it after Saturday but it's odd the whole team weren't there.

"Movistar ended up doing the Team Sky job of riding tempo on the front of the bunch but their motivation was to get rid of Porte on what turned out to be a bad day for the Australian - he needs to recover because Froome will need him.

"But Froome deserves a lot of credit for keeping a cool head when he was isolated and in the end, nobody had the legs to beat him."

Listen to the BBC Radio 5 live podcast on stage nine

Alejandro Valverde is now second, one minute 25 seconds behind Froome.

It was a gripping and engrossing stage in the Pyrenees that saw Team Sky's Peter Kennaugh go down in an early crash and team-mate Porte, who looked so strong on Saturday as he helped Froome claim yellow, slip badly off the pace and eventually finish 17 minutes 59 seconds after the stage winner.

"All in all it was a tough day for the team," said Team Sky boss Sir David Brailsford.

"Everybody decided to take it on early and thankfully Chris had the legs to look after himself.

"He is a very resilient guy and he is going well - and if you are going well then that is what counts. He did not feel under pressure physically all day.

Froome's grip on the yellow jersey looked to be loosening as his team-mates struggled to keep pace in a race that was splintered on the first of five punishing mountain climbs.

The Garmin-Sharp team of eventual stage winner Martin were chiefly responsible with Britain's David Millar among the first of their riders to up the pace.

On the second climb, Garmin-Sharp duo Tom Danielson and Ryder Hesjedal attacked and reached the summit first, while Birmingham-born Martin sprinted clear on the final mountain with Astana rider Fuglsang.

Martin and Fuglsang were allowed to move clear by Froome because they posed less of a threat to his overall race lead than other riders in the group, and he was more concerned with keeping tabs on Movistar duo Valverde and Nairo Quintana, and Saxo-Tinkoff's two-time Tour winner Alberto Contador.

The Movistar team maintained a well-marshalled presence towards the front of Froome's group throughout the race and, after failing to shake off the British rider in the valleys, they tried to break him on the day's final mountain ascent.

Three times Quintana attacked and three times Froome, who claimed yellow on Saturday, brought him back.

However, the expected counter-attack from either Valverde or Contador failed to materialise and the riders all reached the final summit together.

The final 30km was predominantly downhill and Froome was able to keep pace with his rivals as they all finished 20 seconds behind Martin.

Bauke Mollema moved up to third in the general classification, with Laurens ten Dam now fourth.

Martin, 26, won a stage of this year's Volta a Catalunya and the Liege-Bastogne-Liege one-day race.

"I knew the last corner was crucial," said Martin of his stage victory on Sunday.

"I was quite confident of being a faster sprinter than Jakob but you never know what is going to happen.

"I was very confident and that comes from the victories I have had this year - it gives you a calmness."

Team Sky are down to eight riders after Vasil Kiryienka was forced to abandon the race after finishing outside the time limit.

The first rest day of the Tour is on Monday, before the race resumes in Saint-Gildas-des-Bois on Tuesday, with a 195km stage that is expected to finish in a bunch sprint in Saint-Malo.

126 comments
Back to top
unknown