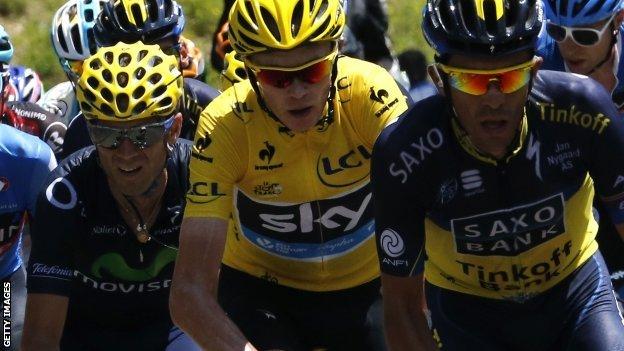 The 182 riders remaining in the 100th Tour de France are enjoying a well-earned rest day on Monday.

Britain's Chris Froome is in the race leader's yellow jersey after opening up a one minute 25 seconds lead on his nearest rival Alejandro Valverde over the first nine stages.

BBC Sport commentators Rob Hayles and Graham Jones assess Froome's chances of holding onto the yellow jersey as the race heads from north-western France to the Alps in the south east.

That has been a terrific opening week of racing, culminating in two great stages.

Team Sky and Chris Froome's display in winning Saturday's first mountain stage in the Pyrenees was a bit special, but I've never seen anything like Sunday's racing before.

It was quite incredible.

I spoke to Britain's David Millar, who made the initial break with his Garmin-Sharp team-mate Jack Bauer, and he said they had the plan set in stone - they had a game plan, much like Team Sky did on Saturday and Cannondale did on stage seven and it proved decisive.

Team Sky were the big losers on Sunday with Richie Porte losing so much time. With the benefit of hindsight, maybe they went too hard on Saturday and were made to pay.

They all seemed to have been coping with the hot weather over the first week, which meant they could go deep into the red, but they dug themselves into too deep a hole from which to recover.

Team Sky will have been wanting to use the start of the race to recover a bit more, but Garmin-Sharp smashed the race up and only Froome was able to go with them, while the likes of Alberto Contador and Alejandro Valverde were there because they were not hurting as much from the day before.

Team Sky proved last year that they were strong enough to defend the yellow jersey, but they are possibly not as strong as last year and are going to struggle a bit more with Vasil Kiryienka being eliminated from the race for not making the time cut at the end of stage nine.

However, they will have a helping hand in three of the next four stages which are likely to end in sprint finishes. Mark Cavendish will certainly be eyeing those but then so too will Andre Greipel, Marcel Kittel and green points jersey leader Peter Sagan.

I can't see anyone catching Sagan in the race for the green jersey though. He has a massive 93-point lead over Greipel, more points than anyone has ever had and he's got plenty more opportunities to add to his tally.

Froome will look to take another 30 to 40 seconds out of his main rivals in Wednesday's 33km individual time trial, although Omega Pharma-Quickstep's world time trial champion Tony Martin will be favourite for the stage win.

It's not about winning the stage for Froome though. It's about putting time on Valverde and Contador before we hit the Alps next weekend.

Contador is a decent time trial rider but he will biding his time and should not be written off. He looked on the limit on Saturday and Sunday but he can still ride himself into this race.

With Porte dropping away, Team Sky have just one game plan left but at least it's still a decent one.

Normally I've had enough after a few days of flat racing at the Tour and just want to get to the mountains, but this year there has been lots going on right from the start with a great opening three days on Corsica.

The riders are the ones that make the racing and there has been plenty of that so far. Sunday's stage was great for the first three hours and then it really livened up again in the closing kilometres.

The Movistar team of Alejandro Valverde will be delighted that they managed to distance Richie Porte and isolate Chris Froome but disappointed they couldn't convert it into a stage win.

Having said that, Team Sky and Froome will be pretty happy with the way things are at the end of the first week.

They won't be quite as happy as they were at the end of Saturday's stage, but they have now got a day off to regroup and, apart from Tuesday's individual time trial, the next few days are all about the sprinters and their teams will be a big help for Sky.

Britain's Mark Cavendish and Andre Greipel of Germany will be keen to add to their solitary stage wins and their respective Omega Pharma-Quickstep and Lotto Belisol teams will be keen to put them in the right place at the finishing line.

However, their hopes of winning the green points jersey are over, unless Peter Sagan is involved in an accident that ends his race.

The Slovakian is too far in front in that classification and he will still be up there contesting intermediate sprints and sprint finishes and he is also likely to pick up points on the hilly stage to Lyon, which Cavendish and Greipel cannot.

I think if you offered Cavendish three stage wins on the 2013 Tour right now, he would take it. He will be satisfied because he lost a couple of chances in the opening week because of crashes.

I can't see beyond world time trial champion Tony Martin for the stage win on Wednesday's 33km individual time trial to Mont Saint-Michel, but it will provide Froome with an opportunity to put more time on his rivals.

He won the Olympic bronze medal in the time trial and I can see him beating Contador by one minute if he is at his best. The Spaniard is nowhere near as good at time trials as he used to be, while Valverde is not particularly strong and I can see him losing two minutes.

The week ends with the big stage finish at the top of Mont Ventoux and it is a climb that should suit Team Sky and Froome. A lot will depend on how much time advantage they have on their rivals, but they should be comfortable and confident of ending the second week with the yellow jersey.