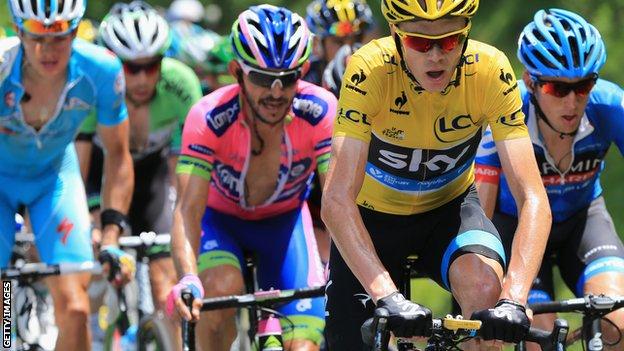 Team Sky boss Sir Dave Brailsford admitted tactical changes would be made after race leader Chris Froome was left on his own at the Tour de France.

"There are some valuable lessons to be learned that we will take into the rest of the race," Brailsford said.

"You learn more from adversity than success and we have learned a lot."

Froome finished 14th in Sunday's ninth stage and remained one minute and 25 seconds ahead of Movistar's Alejandro Valverde in second, with key mountain helper Porte, who had been second after stage eight, slipping to 33rd overall.

But Team Sky's Vasili Kiryienka, another important member of Froome's supporting party, who had helped Froome to win Saturday's eighth stage, was forced out of the race after finishing outside the time limit.

"Once I got into that front group and was isolated, it did sink in that it was going to be a really long day and I was going to have to dig in," said Froome.

"I just had to make the most of the situation I was in and try to limit any losses if there were going to be any."

Alberto Contador, the champion in 2007 and 2009, is in sixth place overall, one minute and 51 seconds behind Froome.

"You could argue, using a boxing analogy, he's taken the biggest right hook on the chin he's going to take and he didn't flinch," Brailsford said of race favourite Froome.

Movistar boss Eusebio Unzue was delighted with the outcome of Sunday's proceedings and said: "We tried to isolate Froome and things went well during the first two climbs of the day.

"We spent the whole day trying to make Porte disappear out of sight, prevent him from coming back and stop Sky from having the possible double strategy of Porte and Froome."

After Monday's rest day, the race will resume on Tuesday with 12 stages remaining before its conclusion on 21 July.

141 comments
Back to top
unknown