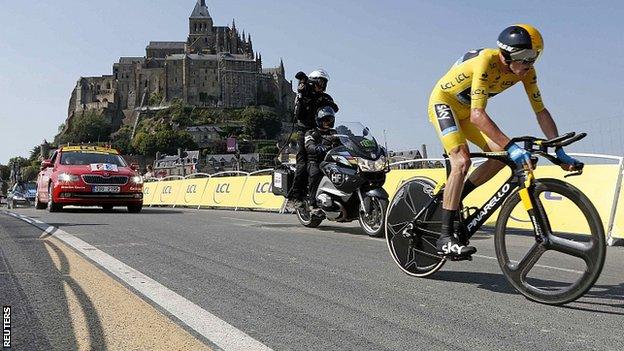 Froome was second, 12 seconds behind German Tony Martin in the 33km stage.

The Team Sky rider gained two minutes on his nearest rival Alejandro Valverde and leads the Spaniard by three minutes 25 secs in the general classification.

Mark Cavendish had urine thrown at him during the stage, though it is unclear whether he was deliberately targeted.

The incident happened a day after the Manxman collided with Tom Veelers in the sprint that decided stage 10.

"I don't think even Team Sky would have anticipated that Chris Froome would put so much time into everybody today.

"I thought he might have taken a minute-and-a-half out of Alejandro Valverde but he took more than that, and out of Contador as well.

"There were no other genuine general classification contenders in the top 10 today, which shows what a difference Froome's all-round ability is making - winning the Tour is not just about climbing, he can time trial as well.

"Missing out on the stage win won't bother Chris, but I think what made a difference there was that the run-in was into a strong headwind that had picked up since Tony Martin was out on the course much earlier in the day.

"The incident with urine being thrown at Mark Cavendish was pretty disgusting. Fortunately that sort of thing is quite rare in cycling, when you consider the number of people on the roadside. It is an open event on open roads and incidents with spectators do happen, but that kind of thing was a first for me.

"I think Cavendish took it badly, and the criticism when he has missed out on stage wins has probably been heavier than it has needed to be. Being booed as well means things have been very difficult for him but he has a strong enough personality to deal with it and bounce back."

Cavendish was one of the first riders to leave Avranches on Wednesday, with world time trial champion Tony Martin also an early starter.

Martin held the best time at the two time-check points all day until Froome, who as race leader was the last man out, rolled off the ramp.

Froome was one second ahead at the 9.5km mark and two seconds ahead at the 22.5km point, but faded as he rode into a headwind in the final 11km and could not beat Martin's time of 36 minutes and 29 seconds. Belgian Thomas De Gendt finished third.

"I had a terrible last 30 minutes," said Martin, who grimaced as he watched Froome's progress on a TV near the finish line at the picturesque island on the Normandy coast.

"At the start I was quite sure I would hold on because I had a good lead on Thomas De Gendt. I didn't expect Froome to come so close and I am really happy he lost some seconds in the final section."

The stage win would have been merely a bonus for Froome, however, because his main objective was to gain time on the riders closest to him in the general classification, where Martin is not a threat.

This relatively short stage was expected to limit his rivals' losses but instead he took more than two minutes out of Valverde, fellow Spaniard Alberto Contador and Dutch rider Bauke Mollema.

"I'm really happy with the result and having extended my advantage on my GC rivals," Froome said afterwards. "The objective today was to try and take the maximum time possible from them.

"It gives me a good buffer going into the next few days but I think I am going to need every second I can get, with the way these guys are riding."

Contador, who is now three minutes and 54 seconds behind Froome, refused to admit defeat.

"No-one has won the Tour de France yet and no-one has lost it, We have to get to Paris yet,'' he said.

"It's true that Chris is in impressive form and is a great climber, but there are still many stages left.''

Froome will not face any challenges to the yellow jersey over the next two flat stages, which offer Cavendish an opportunity to return to winning ways on what has been a turbulent Tour for the Manxman.

So far this year, Cavendish has only one victory - which came in stage five - and he will face stern competition for more from fellow sprinters Andre Greipel and Marcel Kittel.