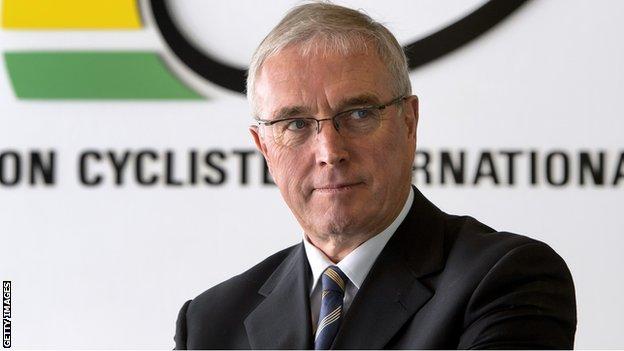 The International Cycling Union (UCI) made a mistake accepting a donation from Lance Armstrong in 2002, president Pat McQuaid has admitted.

In 2012 Armstrong, 41, was banned for life and stripped of seven Tour de France titles for serial doping.

"On reflection, it would have been better had we not taken that money," McQuaid, 63, told BBC Radio 5 live.

"It was done with the best interests, not in any underhand way."

Armstrong received a life ban from the United States Anti-Doping Agency for what it called "the most sophisticated, professionalised and successful doping programme that sport has ever seen".

The UCI denied it accepted the money to cover up a positive drug test from Armstrong.

McQuaid, who is opposed for the UCI leadership by head of British Cycling Brian Cookson, also believes the UCI is a victim of its own success in catching cheats.

"When we catch cheats, it's used in a sense as a stick to beat the back of the UCI and I think that's a little bit unfair," he said.

"We spend in the region of seven million Swiss Francs (£4.87m) a year to catch cheats.