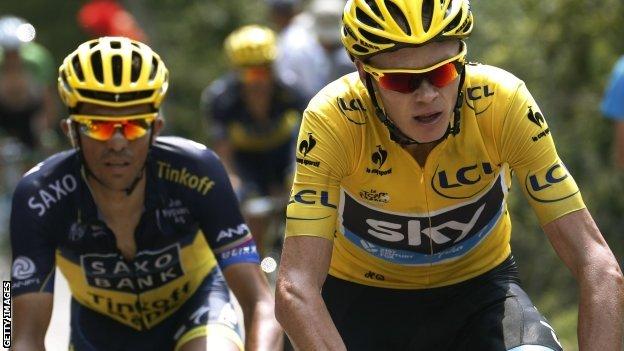 The 181 riders remaining in the 100th Tour de France are enjoying a well-earned rest day on Monday after two weeks of racing.

Britain's Chris Froome has held on to the race leader's yellow jersey for the entire second week after winning it on 6 July and his dominant display in claiming Sunday's stage 15 summit finish on Mont Ventoux enabled him to open a lead of four minutes, 14 seconds to second-placed Bauke Mollema.

BBC Sport commentators Rob Hayles and Graham Jones reflect on a stunning week of racing and look forward to the final week in the Alps before the race heads to Sunday's finish in Paris.

The race is certainly not over but there will be some sleepless nights among the riders trying to work out how they are going to catch Chris Froome.

I was extremely impressed with his victory on Mont Ventoux. It was an incredible ride by both him and his Team Sky team-mates.

They have faced a few questions over the last few days and have been on the back foot, especially when Chris lost a hefty chunk of his lead to Alberto Contador and Mollema on Friday.

But the doubters will be quieter after the way Froome accelerated away from Contador and then Nairo Quintana on Ventoux - it was a huge psychological and physical blow for Contador in particular.

But it wasn't the best day's racing of the week - that was Mark Cavendish's win on Friday, one of the most incredible races I've ever seen.

I know the Omega Pharma-Quickstep management were absolutely delighted because I spoke with their sporting director Brian Holm and he said in terms of planning and execution, it was the best stage he's ever done.

Although Cavendish won his 25th Tour stage to move joint-third with Andre Leducq on the all-time list, Contador and Mollema were the big winners, taking 69 seconds out of Froome's lead.

However, Froome's ride up Ventoux has more than made up for that. I think he was happy to give away the amount of time he did because he knew, with fingers crossed, that he was going to get that back on Sunday.

All things being equal nobody can beat him but if he was to suffer a puncture or a mechanical failure at a bad moment it would depend how the other riders reacted - Alejandro Valverde's hopes of winning the Tour were ended by a puncture on Friday.

If the riders are being gentlemen, they could say Froome is the strongest and wait for him - he certainly holds a decisive lead and there is no way, form-wise, that he can be beaten. On paper it looks like the others are fighting for second and third.

With the hilly individual time trial coming up on Wednesday, Quintana, who currently leads the best young rider classification and is sixth, one minute, 33 seconds behind Mollema, could move up the standings and challenge for a place on the podium.

But we've got to look at the rest of the road and there's an awful lot of descending coming up and the long-term weather forecast is suggesting we may get some rain in the Alps.

That, I would imagine, would play into everybody else's hands, because if there is a weak point for Froome, it is the descents. And on Thursday they have to go down Alp d'Huez.

The rain could play a part just like it did at the Giro d'Italia in May. It just highlights that the Tour is not over, although Froome would have to have a very bad day to lose it now.

This is turning into one of the great Tour de France races - despite Chris Froome dominating the overall standings and Peter Sagan all but wrapping up the green points jersey.

There have not been any dull days but Mark Cavendish's win on Friday and Froome's victory on Mont Ventoux were the highlights.

Cavendish showed he can use his head and get in the right moves, while Froome won it in the style of an Eddy Merckx or Bernard Hinault by attacking from the front and from a long way out.

Tour veteran Jens Voigt on the art of the breakaway

"Knowing when I can get away in a break is experience but also instinct. I sometimes have a vision before it happens."

Team Sky will be satisfied to have come out of the last week relatively unscathed, despite losing two riders - Vasil Kiryienka, who finished outside a cut-off time, and the injured Edvald Boasson Hagen - and they will take heart from that.

They should have no problems with Tuesday's hilly stage to Gap but they will have marked Wednesday's individual time trial as one that Froome could win.

He was second in the flatter individual time trial to Mont St Michel on stage 11, which world time trial champion Tony Martin won, but the hillier terrain of this second test will suit Froome more and he could win his third stage of the race and take at least another minute out of Contador and a couple of minutes on other riders.

That would see Froome go into the Alps with a lead of more than five minutes and he will have great help from his team-mate Richie Porte, who looks like he has recovered from whatever was troubling him in the Pyrenees.

I'm really looking forward to the double ascent of Alpe d'Huez on Thursday - if you thought the scenes on Mont Ventoux were great, then Alpe d'Huez will be something else. It is always a great stage to watch and a double climb has never been done before so it will be even more special.

Froome is in a really strong position but the minor places are important to a lot of the riders so expect animated stages up to the finish, particularly because we are yet to have a home winner during this year's 100th race and the French will want one.

They are going to have to get Pierre Rolland up the road in a break on an Alpine stage. He's got plenty of leeway now, having dropped back in the overall standings. I think he'll try again because he'll want the polka dot King of the Mountains jersey back after Froome took it on Mont Ventoux.