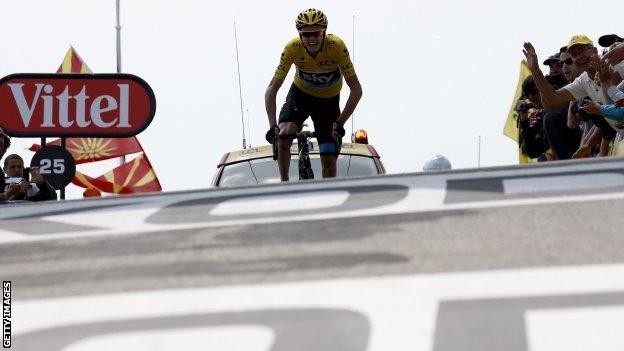 Chris Froome produced a blistering ride up Mont Ventoux to win stage 15 of the Tour de France and extend his overall lead in the 100th edition of the race.

The British rider attacked his main rival Alberto Contador around 7km from the summit finish at the end of the 242.5km race - the longest of the Tour.

He quickly caught Colombian rider Nairo Quintana, who made his move earlier and then rode clear with 1.2km left.

Froome won by 29 seconds to extend his lead over Bauke Mollema and Contador.

The Team Sky rider, who also won the mountain-top finish on stage eight in a similarly dominant fashion, strengthened his grip on the race leader's yellow jersey as he beat Mollema, who is second in the overall standings, by one minute, 46 seconds and third-placed Contador by 1'40".

Dutchman Mollema, who rides for Belkin, is now 4'14" behind Froome, while Saxo-Tinkoff's Contador is 4'25" back with six stages remaining in the three-week race.

Froome said: "My main objective was to get more of a buffer on the general classification riders but I didn't see myself winning the stage.

"I expected Quintana to go further out than he did but I wasn't expecting it to be that hard to catch him and when I did I thought he was going to win the stage.

"But in the last two kilometres he started fading - I didn't really attack, he just couldn't hold my wheel.

"This climb is so historic and means so much to this race, especially in the 100th edition of the race."

"That was a fantastic victory by Chris Froome and one you don't see very often these days.

"The race leader, if he is going to go on the attack, generally does it in the last kilometre or so to gain a few seconds whereas this was a real demonstration by the best climber in the race.

"It was a good move by Nairo Quintana because it is better to ride up the mountain at your own pace and although I knew Froome would attack as soon as he caught him, the Colombian benefited because they then rode together.

"Froome showed he is not frightened of Quintana, who is an excellent climber, and I wouldn't rule out seeing the Movistar rider on the podium in Paris - he should love next week's double climb of Alpe d'Heuz.

"Team Sky will be pleased with Richie Porte's performance - he looks like he's got over whatever was troubling him in the Pyrenees and he will be a great help to Froome in the Alps - although I can't see anyone catching the race leader now."

Listen to the stage 15 podacst on BBC Radio 5 live

The ascent of Mont Ventoux achieved notoriety on 13 July 1967 when it claimed the life of Britain's first world road race champion Tommy Simpson, who died close to the summit after taking a cocktail of amphetamines and alcohol.

Hopes of a French winner on Bastille Day rested on the shoulders of Sylvain Chavanel after the Omega Pharma-Quickstep rider raced clear of a breakaway group of nine riders as they hit the bottom of the final climb.

The 34-year-old, who has won three Tour stages, opened up a lead of 90 seconds over the main bunch but he was slowly reeled back in and caught with 12km of the climb remaining.

Euskaltel's Mikel Nieve had already made his bid for glory and he was soon joined by Quintana and the pair opened up a gap of 45 seconds on a group containing Contador, Froome and his team-mate Richie Porte.

Australian Porte continued to pace Froome until the British rider accelerated with 7km to go. Contador was unable to match Froome's burst and quickly dropped back.

Quintana moved away from Nieve but soon had Froome for company. The Team Sky leader tried a couple of attacks but his Movistar companion was equal to them until he finally cracked inside the final 1500m of the race, leaving Froome to race to the finish on his own.

Monday is a rest day and racing resumes with stage 16 on Tuesday - a hilly 168km race from Vaison-la-Romaine to Gap.