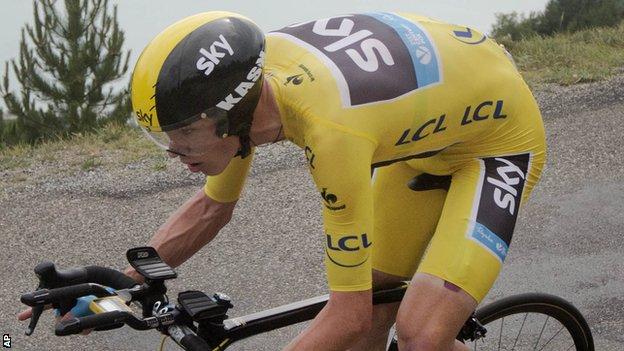 A mid-stage switch from a road bike to a time-trial model proved crucial as Froome triumphed over the 32km run.

"I was actually quite surprised by that finish. Chris Froome threw caution to the wind there and was perhaps fortunate that the roads had dried up lower down for him. The way that Froome delivered the stage victory there was absolutely precise though. It was typical of Team Sky, they pick the event apart in the planning stage. I think that the Saxo-Tinkoff pair of Alberto Contador and Roman Kreuziger made a big mistake by not changing their bikes".

Dutch Belkin rider Mollema started the day as the nearest rider to Froome in the general classification, but is now fourth, more than six minutes adrift.

"Visiting the podium three times was just incredible," said Froome, who has also won stages on Mont Ventoux and in the Pyreenes.

"I'm really happy with the result from today. I wanted to hold back a little bit for the days ahead and I was actually prepared to lose a little bit of time, so I'm quite surprised I won the stage."

After beating the other contenders for the yellow jersey by about two minutes in the Tour's other time trial at Mont St Michel, Froome had been expected to extend his lead on stage 17, between Embrun and Chorges.

But his rivals may be content that the 28-year-old Briton is still just about within range with the traditional last-day procession to Paris leaving them only three competitive stages to attack the leader.

Froome's third stage win of this year's Tour came courtesy of a combination of powerful riding and canny strategy.

With two category-two climbs on a twisting, technical route, most riders opted to stay on their usual road bicycles rather than swap to the time-trial specific machines that help their aerodynamics on straighter, flatter stretches.

Race rules, however, allow riders to change bikes at any point and Froome's decision to take a time-trial model from his team's support car for the final 12km descent proved wise.

Despite contending with drizzle on the upper slopes, he was able to make up 20 seconds on Contador, who remained on his normal bike.

Contador's Saxo-Tinkoff team-mate Roman Kreuziger climbed into third in the overall standings, four minutes 51 adrift of Froome, by finishing the stage in fourth.

However Jean-Christophe Peraud, the highest ranked Frenchman in the general classification coming into the day's stage, was forced to abandon the race after fracturing a collarbone on a morning reconnaissance ride and then falling on the same joint as he struggled in the afternoon.

Froome's bid to succeed compatriot Sir Bradley Wiggins as overall champion will be tested again on Thursday as the field climb Alpe d'Huez twice in the centrepiece stage on the 100th edition of the Tour.

But he believes that race organisers should shorten the stage if the thunderstorms, which are forecast, strike.

"I think it would be sad not to do the planned parcours and the two ascents of Alpe d'Huez as it's something special to go along with the 100th Tour de France," he said.

"But having said that, safety definitely comes first. It's a dangerous descent but if it starts raining I would hope the race organisers make the decision to make it just one climb. The safety of riders has to come first.

"I completely understand that at the end of the day all the riders will be in the same conditions.

"If we have to do the dangerous descent in the wet we'll be up for it. Everyone is in the same boat as us in that regard. I just hope that it is not going to come to that."