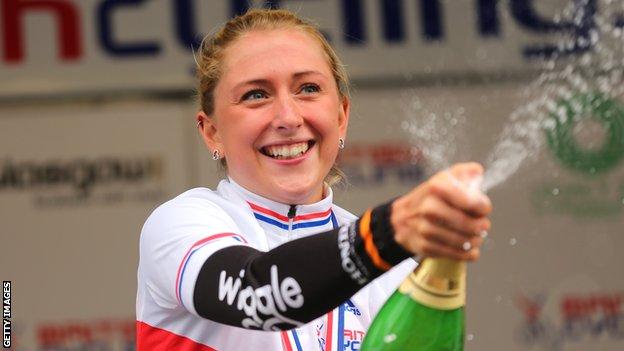 Double Olympic gold medallist Laura Trott supports the return of a women's Tour de France but thinks a campaign to reinstate it must be re-thought.

Fellow British cyclist Emma Pooley was one of four riders who published a petition to resurrect the event, which has not been held since 2009.

"There should be a Tour de France for women. But I think firstly we need to work on what we have," Trott tweeted.

"Get the tours we do have televised. Then work on the women getting the full set of classics but over a shorter distance, like Flanders.

"Then work on the tours that we already have with loyal sponsors."

Trott gained her gold medals in the velodrome at London 2012, but has taken part in road cycling events since joining the Wiggle Honda Pro Cycling team.

Pooley joined the debate - initiated by BBC Sport's Ollie Williams - on Twitter arguing "a women's Tour and improving the races we have already are not mutually exclusive".

Tour Feminin, a French grand tour for women, ran intermittently from 1984 through 2009. But it was beset with problems related to unpaid prize money, lack of sponsorship and excessively long stages.

The new petition asks that women have their own event running in conjunction with the Tour, held "at the same time, over the same distances, on the same days" as the men.

Trott feared that interest in a female Tour could be damaged if the stages were run over an equal distance as "people will not watch if the bunch comes in, in dribs and drabs", citing the times recorded in the Giro Rosa.

Cycling's governing body, the Union Cycliste Internationale, currently has rules in place that limit the distance women can ride in a single stage to much less than men.

It means a female Tour alongside the current event would not be possible unless they started or finished stages in different places.

Meanwhile, it has been announced that in May 2014 a new elite cycling stage race for women will be held across the south east of England.

The Women's Tour will take place over five days, and "will see top cyclists for around the world take on Great Britain's Olympic heroines and rising stars".