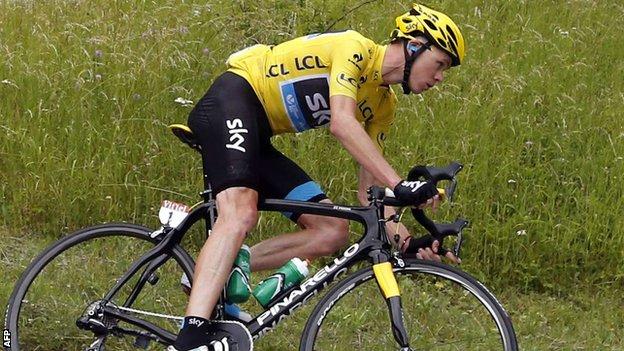 Chris Froome moved closer to securing Tour de France victory after finishing with his nearest rivals on the 19th stage to Le Grand-Bornand.

The Briton is five minutes 11 seconds ahead of Alberto Contador with one more day to survive in the high mountains.

"I definitely had a sigh of relief after getting today out of the way - this was one of the stages I was most worried about," Froome said afterwards.

"Chris Froome got a bit wet towards the end but the rain was just about the only thing that affected him today. He and Team Sky will be very happy with the way the stage went, because they did not even have to do much too work at the front of the peloton.

"The pace did go up on the last climb but I think that was because Saxo-Tinkoff were looking to protect their lead in the team category, rather than looking to attack Froome. I think everybody is too tired to do that.

"A lot of them were probably thinking that it would be a lot of effort for something that is probably very unlikely to happen anyway. The race for the yellow jersey is over, unless something goes dramatically wrong for Froome, and the others are looking at the minor placings now.

"But there is still a lot to play for. The main fight now is for the podium places and it will come down to the final climb on Saturday. I expect Nairo Quintana will fancy himself to take second overall and possibly win that stage as well, to crown a memorable debut Tour with his first stage win.

"His Movistar team will be going all out for that - Quintana already has the white jersey for best young rider under the age of 25 and whoever wins the stage will probably take the King of the Mountains category too. It all sets us up for a big showdown on the final climb, which is narrow and steep, and it should make quite a spectacle."

Listen to the stage 19 podcast on BBC Radio 5 live

But the mountainous 204.5km route, which included four tough climbs, did not deliver the expected attacks on Froome, who only really came under pressure in the final 20km of the day on the Col de la Croix Fry.

Contador's Saxo-Tinkoff team set the tempo on the way up, but the only move of note came from fifth-placed Joaquim Rodriquez of the Katusha team, who was tracked by Contador, third-placed Colombian Nairo Quintana and Froome.

The Team Sky rider also had to worry about the descent, with Contador speeding down the 13km to the finish line despite heavy rain.

But Froome stayed on his Spanish rival's wheel in an otherwise drama-free stage from his point of view, and has only one more day of serious racing in the Alps to negotiate before Sunday's traditional procession into Paris.

"I was ready for anything after the way the Tour has gone so far," Froome added.

"There was a lot of climbing and, with bad weather forecast, it had the potential to get out of hand. The guys did take it up and attack on the final climb and go pretty quickly down the other side, so I am relieved to get through it.

"But I don't want to get complacent at this stage. Tomorrow's stage is only 125km but it is still one more day to get out of the way before relaxing and heading into Paris."

The most significant movement of the day came in the King of the Mountains category, which Froome also still leads but only by a point after France's Pierre Rolland picked up 52 points by leading the way over three of the categorised climbs.

Rolland only failed to take over at the top after being caught by Costa and the men who were trying in vain to reel in the Portuguese rider on the final climb as the weather was closing in.

He will still be wearing the polka dot jersey on Saturday, with Froome in yellow for his final test.

Stage 20 ends with a tough hors categorie (beyond categorisation) climb to the finish line at Annecy-Semnoz. Even if Froome's yellow jersey is safe, there will be a battle for the podium places with only 47 seconds separating Contador in second and Rodriguez in fifth.

King of the mountains category after stage 19