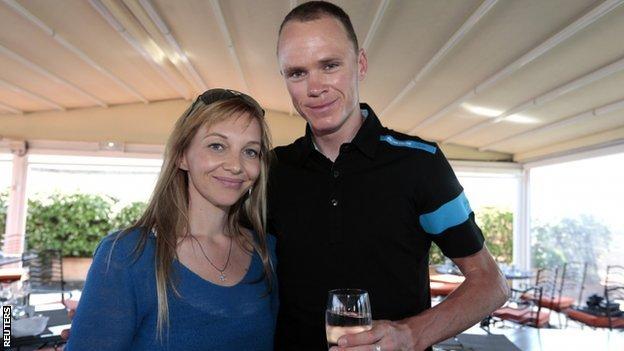 Over the past three weeks, Michelle Cound has proudly watched her British fiance Chris Froome ride towards glory in the world's toughest and most famous cycling race - the Tour de France. On Sunday, he is all but certain to be crowned the winner.

It is not like being a footballer's WAG. I generally stay away from races

Cound, who will be waiting to congratulate the 28-year-old Froome at the finish line in Paris, says the scale of his achievement is yet to truly sink in.

"Winning the Tour will be the ultimate for him but I don't think it has really hit him yet what he is about to do," she told BBC Sport. "He really wants to get to the end and has not been getting his hopes up too much.

"I've been trying to say to him 'listen, what you have already done is incredible, make sure you enjoy what is happening'.

"Seeing him win on Sunday will be like a dream come true for me too. I would like to keep life as normal as possible afterwards, but I don't know how easy that is going to be."

Life already sounds far from normal for Cound, who gave up her job as a cycling photographer in South Africa to join Froome in Europe last year. She now looks after his personal and commercial affairs when he is away training or competing, which is most of the time.

"It is not like being a footballer's WAG," Cound explained. "I generally stay away from races.

"I don't like imposing on Chris and, the way I see it, his job is like any other. I would not have my friends and family come to see me at work every day, so I kind of let him get on with it.

Their first date: "He was about to join Team Sky and was telling me how excited he was. He was saying how they had Jaguars for team cars, which was incredible."

The marriage proposal: "We were in Italy and he made me breakfast in bed, which is not like him at all. He sort of rolled over on to one knee and popped the question. When I replied, he started crying and said 'is that a yes?' Then we went and watched the cycling."

The wedding plans: "We have definitely decided it will be next year, at the end of the cycling season. Both of us have family all over the world so we have to pick the right location. We might go for Kenya, because it is in the middle."

"I don't like to call myself his manager, because Chris makes all the decisions. I just bring all the right people together for him, and basically co-ordinate his life. He likes to know everything is ticking over so he can concentrate on racing."

Cound, who was born in Wales but grew up in South Africa, has known the Kenyan-born Froome since 2009, when they were introduced by South African cyclist Daryl Impey, who wore the Tour leader's yellow jersey earlier in this year's race.

They became an item in 2011, moved in together (into an apartment in Monaco) in 2012, and he proposed to her earlier this year - at a bike race, the Milan-San Remo, naturally.

The plan is to tie the knot at the end of 2014 but, so far, their time together has been mostly spent apart. She watches most of his races at home on TV and has had to get used to him spending most of his time on the road around the world.

Earlier in the Tour, British rider David Millar tweeted: "People tend to forget about our better halves, they do their own Tour de France, year round."

Cound agrees. It is not always easy when your husband-to-be is already married - to his bike.

"People think my lifestyle must be glamorous," she added. "But Chris is away at races or training camps for weeks at a time and, when he is at home, he still trains six or seven hours a day.

"The rest of the time, he wants to put his feet up - he doesn't cook and he doesn't clean.

All these doping questions keep coming up but he has taken it all in his stride. I've seen him grow as a person over the past few weeks

"That is pretty much what it is like all year. There is only one month of the year when he doesn't have to ride and we get a bit of a holiday from it all."

Froome, who leads after 20 of the Tour de France's 21 stages, is set to be crowned the 2013 winner on Sunday night and will enter cycling legend when he rides down the Champs Elysees in a nocturnal finish to mark the race's 100th edition.

Ahead of the finale, which is traditionally a ceremonial procession into Paris for the champion, he has already cycled more than 3,000km (almost 2,000 miles) through the high Alps and Pyrenees, winning three stages and building a lead of more than five minutes after spending more than 80 hours in the saddle.

Danger has lurked at every turn. Along the way he has survived crashes, crosswinds and attacks from his chief rivals. He has had a bumpy ride off his bike too, facing repeated questioning from the world's media about whether his success has come because he is taking illegal drugs.

Cound has not found it easy looking on, mostly from afar. She has gone to watch two stages, including Froome's epic win on Mont Ventoux on 14 July, but during the 23 days of the race, which started on 29 June, they have spent only a handful of hours together.

"It is incredibly stressful watching on TV," she explained. "The mountain stages are super exciting and I get nervous seeing who is going to go on the attack. But the flat stages are probably worse because of all the pushing and shoving that goes on, and the risk of crashes.

"Chris normally tries to send me a quick text message after each stage, especially if he has won or if something has happened to him, just to let me know he is OK.

Chris is genuinely a down to earth guy, and the most polite person. He is a gentleman and he is like that at home too

"But I usually only get to speak to him after he has finished with doping control and the media, got the bus back to the team hotel then had a massage and dinner. That is sometimes around 10:30 at night."

Froome has been coping well with the intense pressure that comes with being the race leader, says Cound, who is adamant it is not necessary to take drugs to win the Tour, as disgraced American Lance Armstrong, who was stripped of his seven Tour wins for doping, claimed was the case when he rode.

"Chris is almost a bit dreamy and he does not get too caught up in the Tour," she added. "He is pretty chilled out and prefers to think about where he can go on holiday at the end of the season, instead of worrying constantly about the race or the things about it.

"All these doping questions keep coming up but he has taken it all in his stride. I've seen him grow as a person over the past few weeks and he has coped with it so well.

"I get upset quite easily by what is being said by journalists or people on social media but I am in a privileged position to know that he is 100% clean. I have seen the work he has put in - how strict he is with his diet and with his training."

It can be an isolated life - Cound is only allowed to attend selected training camps and watches most of the the races away from the partners of other cyclists too - but she says there is a support network out there.

But that does not include Cath Wiggins, the wife of 2012 Tour winner Sir Bradley Wiggins, who did not defend his title because of injury.

The two clashed on Twitter during last year's race when Mrs Wiggins accused Froome, who was riding in a support role for her husband, of being disloyal and ignoring team orders by attacking him.

Cound reacted angrily, also using social media to defend her partner. "I had spoken to Chris on the morning of that incident," she recalled. "I knew what his intentions were and I didn't appreciate those comments, especially coming from someone inside the team.

"Some things are best left off social media and maybe I should have done the same, but it was the heat of the moment and I have always been passionate about the sport. I made comments before and they did not get noticed but, when people realised I was Chris's partner, things got a little bit crazy."

The "War of the WAGS", as it was dubbed, and the supposed rivalry between the two men, threatened to overshadow last year's Tour and this one too before Wiggins pulled out.

Instead the focus has been on Froome, who is now on the cusp of his own success.

"Last year, I don't think Chris's actions were understood," Cound added. "There was a lot of stuff in the media about him showing disrespect to Bradley and it definitely was not the case. Every time he read it, he got upset about it because he is not that type of person.

"Chris is genuinely a down to earth guy, and the most polite person. He is a gentleman and he is like that at home too. That is why I love him so much.

"There were times when he was a bit frustrated last year but in the end it was all part of the process. You cannot just join a team and assume leadership because you are doing well, but he knew he would get his chance - and he has taken it."