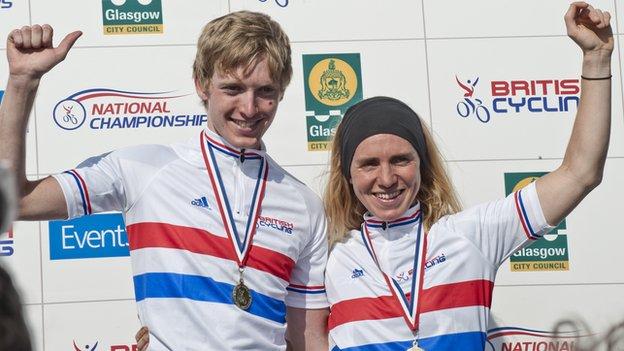 On the 2014 Commonwealth Games course at Cathkin Braes, Ferguson won the men's title and Craigie the women's.

"I'm really happy to have won the British National Jersey, I haven't had stripes since I was a youth," said Ferguson.

"I had been pretty nervous about racing today but it all came together."

Riders from throughout the UK competed over the 5.5km course, developed by Glasgow City Council ahead of the Commonwealth Games.

Glasgow-born Craigie dominated her race and crossed the line to become the first female Scot to win the National Mountain Bike Cross Country Jersey in more than a decade.

"I really wanted to win today, but was so nervous as I have been waiting a long time to get my hands on the British National Jersey," she said.

"It means so much to me to win at home, at Cathkin Braes, in front of a home crowd and they really spurred me on.

"It was amazing to hear people shouting out my name around the course. It really gives you a sense of what the Commonwealth Games is going to be like in Glasgow next year."

Craig Burn, Scottish Cycling's Chief executive, said he was delighted with the event.

"Congratulations to everyone that took part this weekend and especially to all our Championship winners," he added. "

"I was delighted to see the venue come to life with all the spectators cheering on our home talent. It really shows that Glasgow 2014 is going to be a big year for Scottish Cycling."