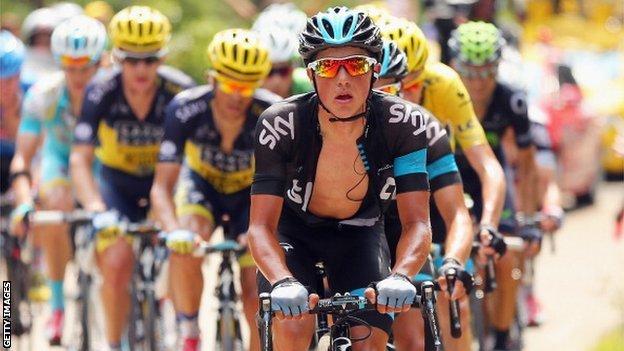 Peter Kennaugh has described finishing his first Tour de France on the Champs Elysees in Paris as the pinnacle of his cycling career.

The 24-year-old from the Isle of Man played a key role in helping Team Sky team-mate Chris Froome to victory and the yellow jersey.

He said: "I will never forget that moment. It will live with me forever."

Last year Kennaugh, who is equally at home on the track, won the island's first Olympic gold for 100 years.

He said: "Being involved in Team Sky and is very special - it feels amazing."

"I was 100% focussed of doing my best for Froomey (Chris Froome) and the team."

The Manx cyclist said at the start of the Tour he could go about his business without to much attention but after his heroics on stage eight, where he led the race up the punishing Alpe-d'Huez climb, everything changed.

"It was amazing. After that everyone was shouting my name," he said.

"It was the highlight of the race for me and it was great to see my friends and family there. It was the first time I had seen familiar faces for weeks.

"It is hard to explain how it feels to finish. All your emotions from three weeks of pain, torture and stress all come out at once.

"It is still sinking in. I've been watching the event since I was six years old with a BMX, I've looked up to these guys for all that time, so to have completed it is a dream come true."

He is now back at home in the Isle of Man, spending time with his family and friends before next month's Tour of Spain.

"Finishing my first Tour de France is part of a progression in my career," he said.

"I am feeling absolutely wrecked now - mentally as well as physically. The racing and media attention has been constant for weeks so I am really looking forward to a short break."