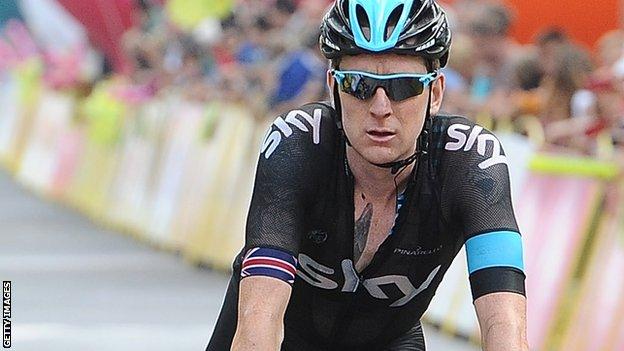 Sir Bradley Wiggins, who was unable to defend his Tour de France title because of illness and injury, has admitted he could not watch this year's race.

A chest infection and knee injury kept Wiggins out of the 2013 Tour, won by Sky team-mate Chris Froome.

"I didn't watch, I couldn't watch. I would have loved to have been there," said Wiggins.

He finished nine minutes behind the stage one winner on his racing return in the Tour of Poland on Saturday.

Wiggins said he "focused on the positives rather than sitting watching telly depressed" when the Tour de France was on.

He added: "I watched the end of the first stage when I heard the bus knocked the finish down, but otherwise I just followed what the guys did from afar."

Wiggins had spoken of his desire to defend his Tour de France title, but Froome had already been given the nod to lead Team Sky at this year's race before Wiggins's withdrawal was announced.

Froome won the 2013 Tour by more than four minutes from Movistar rider Nairo Quintana of Colombia, securing three stage wins along the way.

A year earlier, the Kenya-born rider finished as runner-up to Wiggins and was the Kilburn-raised champion's strongest team-mate in the mountains.

"It was a great team performance, a great individual performance and they deserved everything they got," Wiggins said of Froome's triumph.

"Chris's performance was dominant. I've said before, he's probably the best climber in the world.

"I've never been that good a climber. I can climb but my speciality is the time trial and working back from that. A Tour like this year, Chris is the stronger rider."

They were nine minutes and 13 seconds behind winner Diego Ulissi on a day that saw the field break up into several groups of riders.

Wiggins also confirmed he will miss the Vuelta a Espana next month to prepare for the World Championships, to be held in Florence in September.

The Team Sky rider followed his historic triumph in the 99th edition of the Tour de France, when he became the first Briton to win the yellow jersey, by claiming his fourth Olympic gold medal, winning the men's time trial at London 2012.