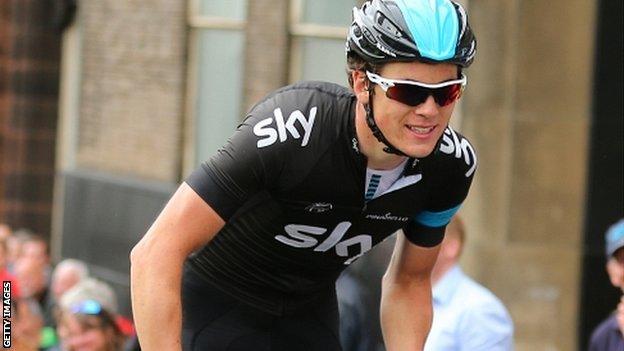 Ben Swift managed a top-10 finish on stage three of the Tour of Poland, while Sir Bradley Wiggins remains off the pace as he returns to action.

Team-mate Wiggins was 21 seconds back and lies 49th overall, 23 minutes and 43 seconds behind leader Rafal Majka.

The 2012 Tour de France champion is taking part in his first race since injury and illness forced him to miss this year's tour.

Team Sky's Sergio Henao maintained his second place overall after the 226km stage from Rzeszow to Krakow, and the Colombian is only four seconds behind Majka.

"The plan today was all about looking after Sergio," Swift told Team Sky's website.

"The team worked hard in that last 30km to ensure the break came back and then I was given the freedom to go for the sprint on my own.

"We did that really well and once everything was back together Brad looked after me once we'd got onto the circuit. He delivered me towards the front and then I was left to fend for myself in the last lap and a half."