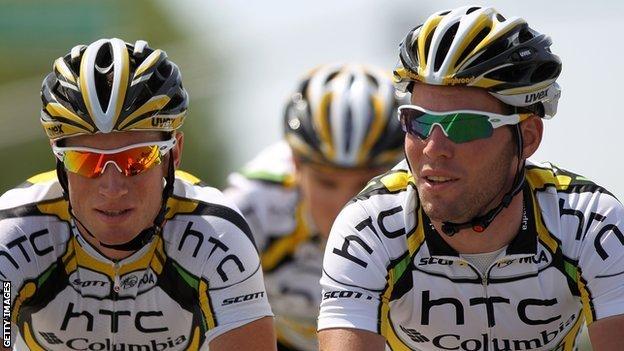 The Manxman will reunite with former lead-out rider Mark Renshaw, 30, next season, as well as his old Team Sky team-mate Rigoberto Uran, 26.

It has also been confirmed that 39-year-old Italian sprinter Alessandro Petacchi has come out of retirement to join the team.

Cavendish and Renshaw worked well together at the now defunct HTC team.

The Australian's arrival is a response to Omega's problems setting Cavendish up for his trademark finishing sprints.

Uran, on the other hand, will become the Belgian team's main contender in the overall competitions of the sport's three Grand Tours.

The Colombian took over the leadership of Team Sky's Giro d'Italia challenge when Sir Bradley Wiggins pulled out, and managed to claim second behind Italy's Vicenzo Nibali.

The 26-year-old climber also won a silver medal in the Olympic road race in London.

Both moves had been widely leaked, and Uran's exit from Team Sky would appear to strengthen Richie Porte's claim to leading the British team at next year's Tour.

Many had expected Uran to be given the leader's role for Team Sky at this month's Vuelta, but Sir Dave Brailsford may now chose to promote his other Colombian star Sergio Henao.

Meanwhile, veteran Petacchi started the season with Lampre-Merida, but quit the sport in April.

"To get back in the game so close to turning 40 with this great team is an incredible feeling,'' said Petacchi, who will act as lead-out for Mark Cavendish.

"It may take me a while to get back into a competitive rhythm, but I can't wait to get started."

Petacchi's first race will be the Kortrijk Criterium on 8 August.