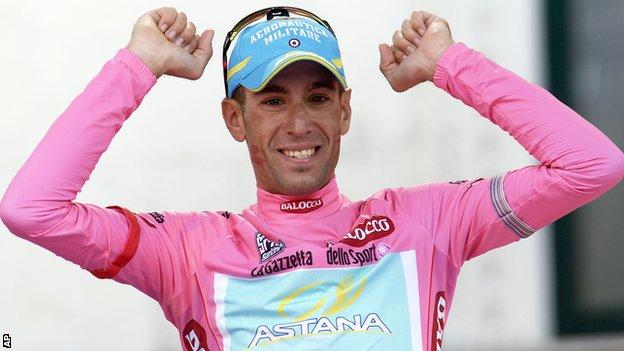 Vincenzo Nibali is aiming to become the fourth rider to win the Giro d'Italia and Vuelta a Espana in the same year when the final three-week Grand Tour of the season starts in Spain on Saturday.

The Italian, 28, who won the Vuelta in 2010, claimed his second Grand Tour title by winning the Giro in May.

Colombia's Sergio Henao and Spanish pair Joaquin Rodriguez and Alejandro Valverde are among his chief rivals.

Nibali said: "I've got nothing to prove after the Giro but I want to do well."

Only Belgian legend Eddy Merckx (1973), Giovanni Battaglin of Italy (1981) and Spain's Alberto Contador (2008) have won the Spanish race in the same year as winning its Italian equivalent.

The three-week race is not as prestigious as the Tour de France and Giro but still attracts the biggest names in the sport - although defending champion Contador and Chris Froome, who became the second British winner of the Tour in July, are not racing.

With Froome focusing on the world road race in Florence at the end of September, Team Sky have chosen Henao to lead a nine-man squad that features 23-year-old Luke Rowe as the solitary British rider - the only other British rider in the race is Andrew Fenn, also 23, who rides for the Omega Pharma - Quick Step team.

However, Nibali has ambitions of using the mountainous route as a warm-up for the world road race, which is also expected to suit the climbing specialists.

"It's important to do well because a lot of people will be watching my performance here as a guide to how well I can ride there," he said.

"If I feel in good enough shape to win and have an advantage of just a minute or two, then I will go for broke in a single stage somewhere.

"If I'm suffering so badly I'm barely able to keep up with the rest of the favourites, I'll do things differently."

Valverde won the Vuelta in 2009 and is likely to feature highly but it is fellow Spaniard Rodriguez who comes into the race in decent form.

The 34-year-old Catalan finished the 2012 season as the top-ranked cyclist but is yet to win a Grand Tour, having twice finished third in the Vuelta (2012 and 2010), second in last year's Giro and third on this year's Tour de France.

"Winning one [Grand Tour] before I retire would be the high point of my career," the Katusha rider told Spanish paper AS.

"It's the difference between having a good career, like mine, and a magnificent one."

This year's Vuelta begins with Saturday's 27.4km team time trial from Vilanova de Arousa to Sanxenxo in north-western Spain and features 11 summit finishes. The penultimate 20th stage takes in the gruelling climb of the Angliru, which has gradients approaching 24%.

The race finishes in Madrid on Sunday, 15 September.