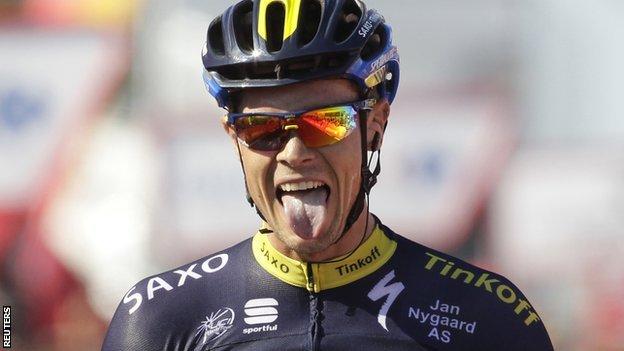 Ireland's Nicolas Roche claimed his first Grand Tour victory by winning the second stage of the Vuelta a Espana.

Roche, son of the 1987 Tour de France winner Stephen Roche, broke away from 25 riders with a kilometre to go on the Vuelta's first summit finish.

"This is really liberating for me," he said. "I've only won eight races in my career but had so many second places."

Overnight leader Janez Brajkovic, of Slovenia, lost contact with the pack in the final part of the climb, handing the lead to the 2010 champion.

Roche, 29, who left French team Ag2r-La Mondiale at the end of last season to join Team Saxo-Tinkoff, becomes the fifth Irishman to win a stage of the Vuelta.

"I did the Tour [de France] this summer working for (Spanish team-mate) Alberto (Contador), but I've always had the Vuelta as a target for the last five years and this year was no different.

"I might finish fourth, fifth or sixth overall in Madrid, but this is what counts for now."

The three-week race, which covers 3358.9 miles and has 10 more mountain-top finishes, finishes in Madrid on Sunday, 15 September.