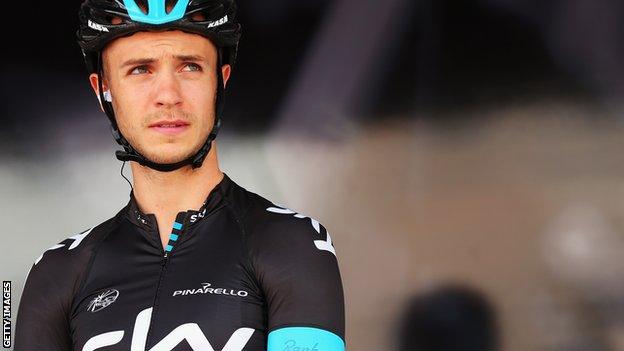 Team Sky's Jonathan Tiernan-Locke will not be defending his 2012 Tour of Britain title when this year's race gets under way in September.

The Plymouth-based rider said the event was not part of his schedule this year, but insisted he would like to race it again in the future.

Tiernan-Locke, 28, had hoped to compete at the Vuelta a Espana this year.

But mid-season fatigue on his first full season for Team Sky led to him being omitted from the line-up.

Team Sky admitted Tiernan-Locke had been "pencilled in" for the Vuelta - which would have been his Grand Tour debut - after he featured in the likes of Paris-Nice, Vuelta al Pais Vasco and the Tour de Suisse.

"All through the year I'd had this goal in mind of reaching mid-summer in great form and going for the Vuelta," said Tiernan-Locke.

"But for whatever reason, mainly down to the training I undertook and not recovering enough after races, I arrived at mid-summer cooked. Three weeks racing the bike is not something to be taken lightly. At any level it's difficult, but at World Tour level, especially so.

"You don't want it to be a bitter memory of just surviving for three weeks. You need to be going well just to do your job and be useful to the team.

"Leading up to the race I'd come completely off the bike to get over the fatigue and reset myself. Going into a Grand Tour, you want to be approaching it with the confidence you're in the form of your life, not 'I think I can get around' - especially for a team like Sky."

Tiernan-Locke, who returned to competitive action at the Vattenfall Cyclassics on Sunday, said he had learned lots of lessons from his experiences this season.

"It's still bike racing at the end of the day, but my role has been different this year. You've got to be incredibly strong to be riding in a helper role, sometimes stronger than if you are a designated leader for a race at times," he said.

"As a domestique you're expending energy all day, whereas if you're fortunate enough to be the leader of a race - obviously you've got to have the legs to finish it off, but you get an easier ride throughout the day and you've just got to use your abilities at the end.

"Mentally I'm pretty good at picking myself up morale-wise. I think you have to have that ability as a cyclist as you do get a lot of disappointment.

"You have to have a selective memory. But there's only so many times you can turn up to races and you start to lose self-esteem when you're not the rider that you should be.

"Having this break I'm starting to feel decent on the bike again. There may be a chance to ride a Grand Tour in the future but the season's going on longer than I've ever done before with Beijing taking me into mid-October. That's going to be a bit of a goal and I'll see if I can get something there and have a strong back end of the year."