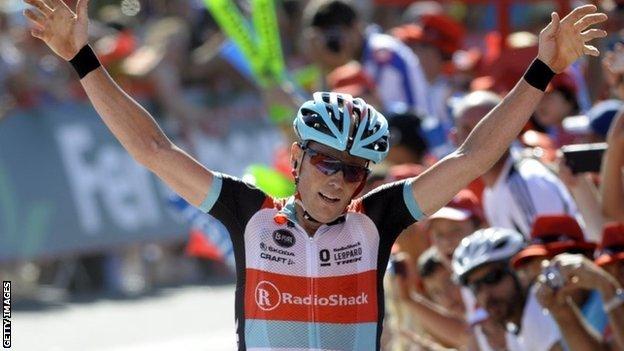 Chris Horner became the oldest rider to win a stage and take the overall lead in a Grand Tour by winning the Vuelta a Espana's stage three hilltop finish.

The American, who is 41 years and 307 days old, raced clear on the short, sharp climb of Mirador de Lobeira.

Horner takes over the race lead from Vincenzo Nibali, who finished three seconds adrift alongside the other main contenders for the overall victory.

"I am going to try for the overall victory," said Horner after the stage.

The RadioShack Leopard rider, who is yet to sign for a team for the 2014 season, surpassed the feats of Pino Cerami and Andrea Noe - Belgian Cerami was 41 years and 95 days when he won a stage at the 1963 Tour de France, while Noe led the 2007 Giro d'Italia at the age of 38.

"I fully appreciate how important it is to win and lead a Grand Tour at my age, the older I get the more I value racing," he continued.

"I understand that every day I race could be my last day on the bike, but I love racing so much I want to continue."

Horner, who turned professional in 1995 but had never previously won a Grand Tour stage, attacked in the final kilometre of the 172.5km race from Vigo.