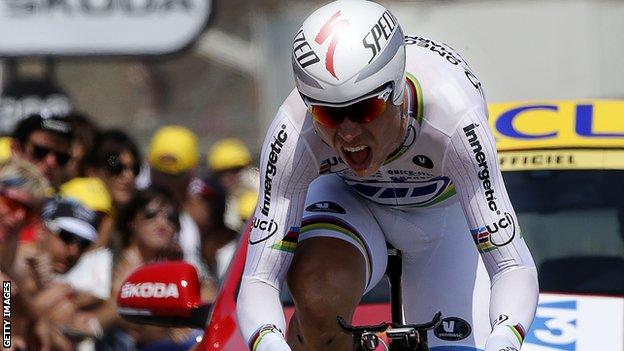 German Tony Martin was denied a 175km breakaway victory on stage six of the Vuelta a Espana when he was caught in the final 20 metres of the race.

The 28-year-old, who raced clear in the opening kilometre of the stage between Guijuelo and Caceres, finished seventh.

Martin said he expected other riders to follow him when he accelerated away from the peloton in the first kilometre.

"I wanted to break away and I was hoping to go with a few other guys but nobody could follow so I just kept going," he said.

The Omega Pharma-Quick Step rider was ultimately disappointed he could not close out an unlikely victory.

"When you do something like that it's always bittersweet. From one end you think you could have won with a bit more luck - on the other hand I felt like a winner."