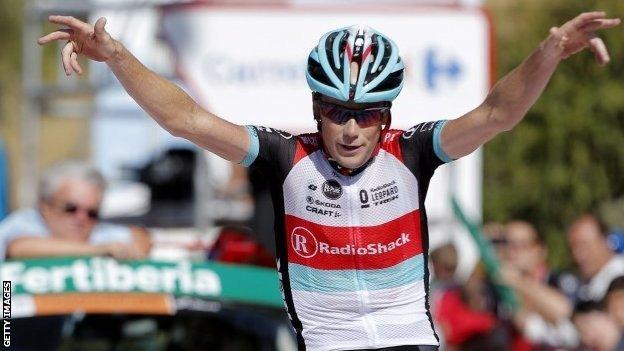 American Chris Horner won a mountain-top finish on stage 10 of the Vuelta a Espana to regain the overall race lead.

Horner, who won stage three to become the oldest rider to lead a Grand Tour, beat Vincenzo Nibali by 48 seconds to open a 43-second lead over the Italian.

The 41-year-old rode away from Nibali and the other main contenders 4.5km from the summit of Alto de Hazallanas.

Nibali gave chase in the final 2km and finished second, 14 seconds clear of a group led by Alejandro Valverde.

Moreno reached the bottom of the final climb in a group that contained the five men behind him in the standings - second-placed Irishman Nicolas Roche, 2013 Giro d'Italia winner Nibali, Valverde, Horner and Jaoquim Rodriquez.

However, the Spaniard was dropped during the second half of the 15.8km ascent of Alto de Hazallanas and finished more than two minutes behind Horner to drop out of the top five.

With the gradient touching 18% in places, the leading group was quickly whittled down to six riders with Roche, who started the day just one second behind Moreno, dropping away to end his hopes of taking the race lead.

Horner was the first to attack off the front and the RadioShack rider quickly established a lead of more than 30 seconds over the group which contained Nibali, Valverde and Rodriguez, and while the race favourites were watching each other's moves, the leader pushed his advantage out to 50 seconds.

Nibali, who won the 2010 Vuelta, eventually set off in pursuit with around 2km remaining but, although he was able to ride away from his companions, he was unable to eat into Horner's lead and the American crossed the line to break the records he set on stage three.

Tuesday is a rest day with the race resuming on Wednesday.