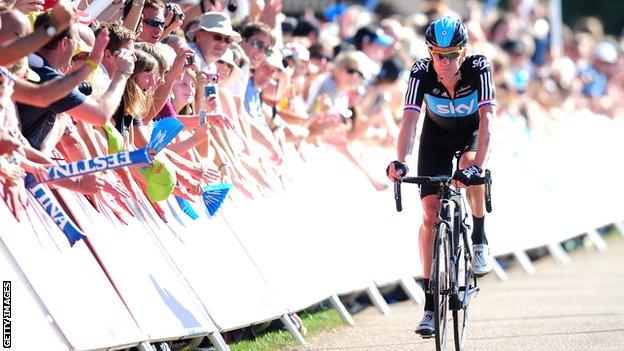 British duo Sir Bradley Wiggins and Mark Cavendish will race in the Tour of Britain, which begins on 15 September in the Scottish Borders.

Jonathan Tiernan-Locke, who won last year and then joined Sky, is left out.

Wiggins said last month he will leave road racing at the end of next season to return to the track and pursue a fifth Olympic medal in 2016.

He was unable to defend his Tour de France title this summer because of illness and injury and withdrew from last year's Tour of Britain with a stomach bug.

He hopes this year's race will benefit his preparations for the individual time trial at the Road World Championships in Florence, Italy on 25 September.

"It's a race I'm fond of and it's nice to see it growing," Wiggins said.

"The crowds and the roads make it special and it's always very humbling to see the fantastic support that we get from the public.

"I'm coming into the race feeling really good. It finishes in close proximity to the world time trial championships, which is my main late-season goal.

"The Tour of Britain is always a tough event and I'm looking forward to getting started."

Sprint specialist Cavendish, who has won seven Tour of Britain stages, will have Italian Alessandro Petacchi alongside him as a team-mate for the first time, and they will face competition from Gerald Ciolek, who won the one-day Milan-San Remo race in March.

Petacchi has also won three stages at the Tour of Britain, while he and Cavendish are two of only five men to win the points jerseys on each of the three Grand Tours - the Tour de France, Giro d'Italia and Vuelta a Espana.

British time trial champion Alex Dowsett rides for the Movistar team, who are making their debut in this year's race.

Ireland's Birmingham-born Dan Martin, who won the one-day Liege-Bastogne-Liege classic earlier this year, but crashed out of the Vuelta a Espana on stage seven, is fit enough to ride for Garmin-Sharp as he continues his preparations for the road race at the World Championships.

There are eight stages in this year's race, taking the riders to Peebles, Cumbria, Knowsley, Stoke-on-Trent, Wales, Devon and Surrey before the finish at Whitehall in London on 22 September.