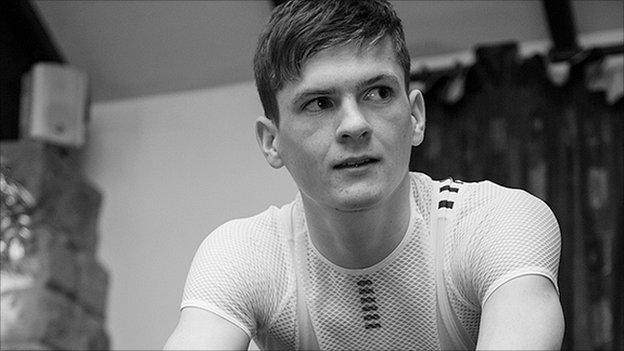 Hampshire cyclist Will Stephenson admits he will be in awe of Sir Bradley Wiggins when he lines up against Britain's first Tour de France winner in the Tour of Britain this weekend.

Stephenson, 18, who is from Ringwood, rides for the Rapha-Condor JLT team and is the event's youngest competitor.

But despite the nerves, Stephenson is determined to enjoy his experience.

"It's going to be a bit surreal, I'll be a little bit awestruck," Stephenson told BBC Radio Solent.

The race begins on 15 September in the Scottish Borders and Olympic champion Wiggins, 33, will lead Team Sky, while 2011 world road race champion Mark Cavendish will race for his Omega Pharma Quick-Step team.

And Stephenson admits he was pretty surprised to be selected for the race, which he says will be the hardest of his fledgling cycling career.

"I was pretty shocked but really pleased and (I'm) really looking forward to it," he added.

"I'm quite nervous and I'm not too sure what to expect. It's going to be the biggest and hardest race I've ever done.

"It's going to be tough but I'm really looking forward to riding with some of the big names and see how I compare to them.

"I think I just need to get over it (nerves) and make sure I'm concentrating at the right time because it's a really tough course."

There are eight stages in this year's race, taking the riders to Peebles, Cumbria, Knowsley, Stoke-on-Trent, Wales, Devon and Surrey before the finish at Whitehall in London on 22 September.

Stephenson is realistic about his chances and has set himself personal targets of what he wants to gain from the experience.

"I want to be in the race and I'd like to get in a breakaway," he said, "Everyone dares to dream, but realistically that (a stage victory) will be really hard but you never know if everything falls into place.

"It's going to be a massive learning experience, I'm hoping everyone will be very helpful, I'll be learning how to cope with recovery and off the bike to make the race easier."