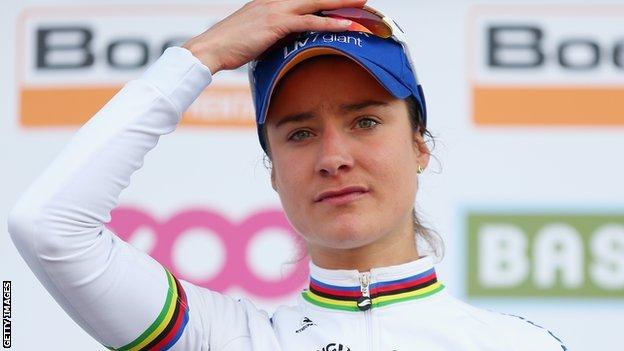 The women's Giro della Toscana was thrown into chaos as the major teams in the race did not start Sunday's final stage because of safety fears.

It is the highest ranked event in the women's road race calendar, but riders were concerned over traffic on the roads in previous stages.

The Rabobank team said organisers had promised improvements but that these were not sufficient.

Organisers insisted the race was safe and criticised those who dropped out.

British team Wiggle-Honda was one of those to pull out of the last stage.

Proud of the teams that didn't start today's stage and disappointed in those that did. Safety has to be guaranteed.

Leading women's cyclist Marianne Vos, of Rabobank, was leading going into the final run between Lucca and Florence and was one of the 59 competitors to withdraw - more than half the field.

Vos later took to Twitter to explain her position: "Quitted #GiroToscana as a protest against dangerous race situations in previous stages. Tough decision while in the lead, but safety first!"

Australian rider Lauren Kitchen, of Wiggle-Honda, tweeted: "No start today in Toscana. Safety needs to assured before we can race."

Orica-AIS cyclist Emma Johansson added: "Proud of all teams/riders standing up for our safety by not starting in Toscana."

Britain's Olympic road race silver medallist Lizzie Armistead was not racing but gave her support to those that refused to ride.

She tweeted: "Proud of the teams that didn't start today's stage and disappointed in those that did. Safety has to be guaranteed."

The top six finishers on Sunday were from the team belonging to race organisers Michela Fanini.

President Brunello Fanini later issued a statement criticising those riders who withdrew and suggested their actions had left spectators disappointed.

The withdrawal is particularly embarrassing considering that the UCI Road World Championships start in Florence, Tuscany on 22 September.