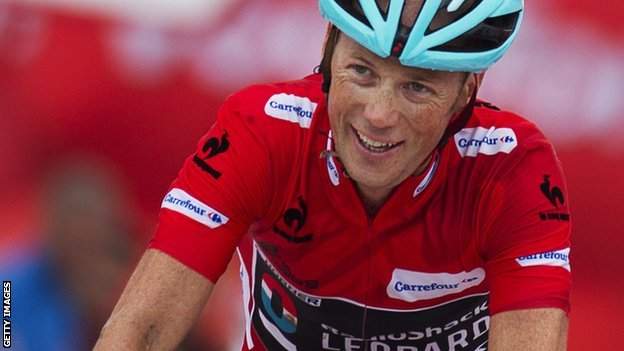 Vuelta a Espana winner Chris Horner has missed a random drugs test - but his Radioshack team have blamed testers for the mix-up.

The American was not at his team hotel when testers arrived on Monday, but Radioshack say he had told authorities about his change of address.

They even released an email from Horner to the testers which they say backs up their claims.

"The management of Radioshack wants to clarify the situation about the alleged missed out of competition anti-doping test of Chris Horner," said a team statement.

"The anti-doping inspectors from the Spanish anti-doping agency that were asked to do the test by the United States anti-doping Agency (Usada) showed up at the wrong hotel in Madrid, where the team were staying but Horner was obviously not to be found.

"Chris Horner updated his whereabouts with Usada before the start of the final stage, giving the agency the name of his hotel for the night, phone number and room number for his one-hour window between 6am and 7am.

"This is all according to the rules and Chris Horner received a confirmation email."

Horner had apparently moved to a hotel where his wife was staying.

Riders must provide their whereabouts to anti-doping authorities, specifying their location for one hour each day. Missing three tests within an 18-month period triggers an investigation.

The team added that they would "seek compensation for this matter with the responsible anti-doping agencies".