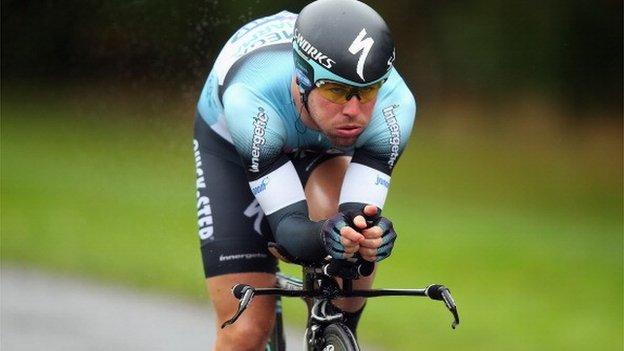 Mark Cavendish sprinted to a record eighth Tour of Britain stage win as he won stage four in Llanberis.

Team Sky's British duo Bradley Wiggins and Ian Stannard remain first and second in the overall standings after finishing in the main bunch.

He said: "I am really happy about the super job of the guys in the team, who stayed with me the entire day."

A breakaway group of 11 riders was clear for much of the 190.9km stage from Stoke-on-Trent to Llanberis in the Snowdonia National Park.

With only 1km remaining, however, they were swallowed up by the chasing pack, setting up a thrilling finish.

Cavendish's Omega Pharma-Quickstep team helped work him into a promising position, sitting on the wheel of Alessandro Petacchi for the final leadout, and no-one could catch him once he surged ahead.

"Fortunately we had the entire day with Iljo (Keisse) in the break, so we didn't have to ride behind," added Manxman Cavendish, whose 25 stage wins in the Tour de France is bettered only by Eddy Merckx (34) and Bernard Hinaut (28).

"On the last climb, I have to say I was at the limit, but the guys stayed with me and brought me back. They showed a big commitment.

"That is why I did my best in the sprint. Even Petacchi, who was still suffering from the crash of a couple days ago, wanted to be there. He really led me out in the final. He put me in the best position for the sprint. Now we are looking forward to the next stages."

Wiggins defended his gold jersey with a 37-second advantage over Stannard.

He said: "It always looks easier than it is but it was tough out there. There was a lot of wind and cold weather but the boys did an incredible job.

"They rode all day to keep the gap at about three or four minutes, and then on the final climb, Ian took it up and did a really impressive job. The attacks started coming but I was always riding just a little bit within myself.

"I knew the run-in as well because [Team Sky boss] Sir Dave Brailsford lived in this town and it's another day ticked off because there are no easy days in the Tour of Britain."

Wiggins added: "I recce'd it last week and it's a tough one with two ascents of Caerphilly. Everyone knows it and it's become a bit of a legendary stage now on the Tour of Britain, but my legs are alright.

"It's surprising how much a 15km time trial can take out of you so I'm always glad to get the day after a time trial out of the way and get back on the road bike."

The eight-stage, 1,045.4km race finishes in London on Sunday.