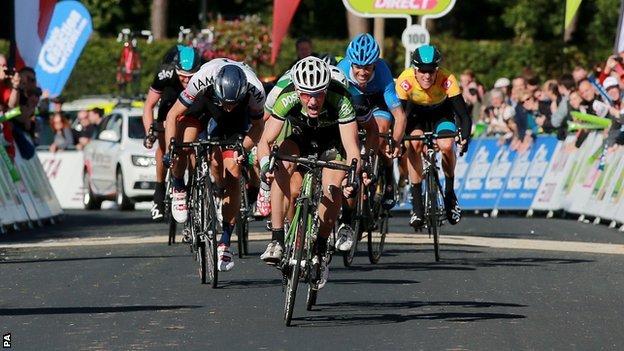 The hilly 177km race from Machynlleth took the riders over the Brecon Beacons and ended with two ascents of Caerphilly Mountain, which reduced the leading group to around 20 riders.

Bennett, second on stage two, sprinted clear in the final 100m to win.

Rolling with the Tour

"As we roll into Wales, we are summoned to the front of the pack once more. Shem Rodgers has got a puncture. Team mechanic Richard Hargreaves jumps out and does the honours.

"Minutes later, Shem's back. "Have you got a 15mm spanner? The brake is rubbing against the wheel." Hargreaves leans out at 30mph and has a look. The brake is not the culprit; it is the tyre. Poor Shem is nudged to the side of the road and given a second new wheel. Race Radio's "iechyd da", or "cheers", is greeted with silence."

Wiggins was seventh to stay 37 seconds ahead of team-mate Ian Stannard.

Bennett told ITV4: "I'm delighted with this week. It was a hard finish and I can't believe I got it.

"I knew if I hung on up the climb I would recuperate quick enough for the sprint."

The 22-year-old riding for An Post-Chain Reaction, outsprinted Michal Golas and Martin Elmiger to record his first stage victory.

"I rode this last week so I knew it would be the Queen stage," said Wiggins.

"I'm nothing without the team and they rode all day, controlling the race. I used Ian and David Lopez right until the last kilometre and they left me just having to sit there."

However, he remains on course to become only the second home winner of the Tour of Britain since its reincarnation in 2004, and the second in as many years after Jonathan Tiernan-Locke's triumph.

"I've worked hard for 20 weeks to be in this condition," he said. "It's been a long road but this is where I wanted to be at the start of the week."

Referring to his style of climbing, the four-time Olympic gold medallist said: "I don't have the acceleration that some I have. I just time trial. I pace my efforts and it works. I won the Tour de France like that."

Friday's sixth stage begins in Sidmouth, with the riders taking in the 138km route to Hayter on Dartmoor for the first summit finish in the Tour's history.