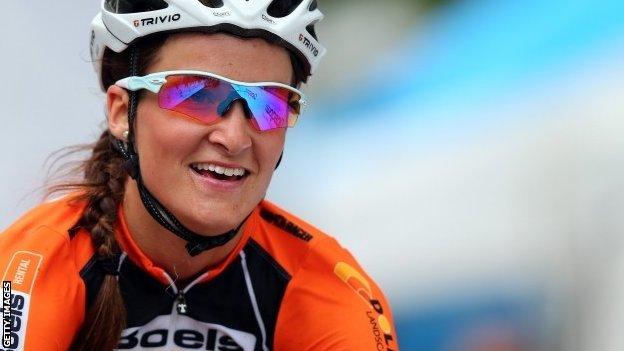 Britain's Lizzie Armitstead says she will have to ride "out of her skin" to win a medal at Saturday's women's road race at the World Championships.

The Olympic silver medallist, 24, leads a team of four British riders in the 140km race, but has admitted the hilly terrain in Italy will not suit her.

"It's not an ideal course but hopefully I can perform out of my skin and do something," she told British Cycling.

"If I have a good day and the race goes my way I can still do something."

The race takes place in Tuscany, starting in Montecatini Terme and finishing with five 16.1km circuits around Florence.

Each circuit features two testing climbs - the 4.3km ascent to Fiesole and the 600m climb of Via Salviati, which has an average gradient of 10% but has sections at 16%.

"This is going to be extremely difficult from all the rumours I have heard from people who have seen the course, but I've got nothing to lose so I'm excited," added Armitstead, who missed last year's race but finished ninth in 2010 and seventh in 2011.

The Great Britain team in Italy are without Emma Pooley, who is taking a break from the sport, as well as the retired Nicole Cooke and injured Sharon Laws.

Two-time junior road world champion Lucy Garner makes her debut in the elite race and and will support Armistead alongside Nikki Harris and team time trial winner Katie Colclough, who, at the age of 23, has told BBC Sport that this will be her last race as a professional cyclist.

"We are missing experienced riders but it's great Lucy Garner has been given the opportunity for a big experience," said Armitstead.

"We'll have to play the fact we have a smaller squad to our advantage, hide in the race and look for opportunities."

Rochelle Gilmore, who runs the British-based Wiggle Honda team, accepts that it is a tough ask for 2013 British road race champion Armitstead to win the race but suggests her challenge should not be dismissed.

"The British team is not super strong so Lizzie may be isolated after a couple of laps but we could expect anything from her," she told BBC Sport.

"We've seen it before when she wants to get a result and she's switched on she's definitely capable of bringing home a medal."

The Netherlands' Marianne Vos is favourite to win the race for a third time. The 26-year-old won her first title in 2006 and followed that with five successive second-place finishes before winning last year's rainbow jersey.

Vos, who beat Armitstead at London 2012 in a memorable rain-soaked finish on the Mall, said of the course: "I like it. It's really hard. That's going to be good for the race, because the best will end up in front for the finish.

"I hope to be there. For sure it's going to be a real good champion."

Gilmore says Vos is the rider to beat but the race is not a foregone conclusion with 141 riders in the field.

The Australian told BBC Sport: "Vos can win on any type of course on any given day and she has a strong team with her.

Italian riders have won four of the last six races, with Maria Bastianelli taking gold in 2007, Tatiana Guderzo winning in 2009 and Giorgia Bronzini claiming successive titles in 2010 and 2011, and Gilmore expects them to provide the main challenge.

"The Italians are always strong and everyone is a threat," she continued.

"Bronzini has won a lot of tough hilly races this year and they also have Tatiana Gedurzo, Noemi Cantele and Rossella Ratto, so they have a lot of possibilities.

"They are in the strongest position to control the race and set it up how they want to."

"It is a really strong peloton, as strong as I've seen it and we're going to see a number of riders that are capable of winning," she said.

"Abbott has won the Giro Rosa a couple of times and this course will suit her and you can't count out the number one in the world, Sweden's Emma Johansson.

"She'll be pretty much alone though because her team are not that strong but this course is good for her and she'd like to top off her season with a win."