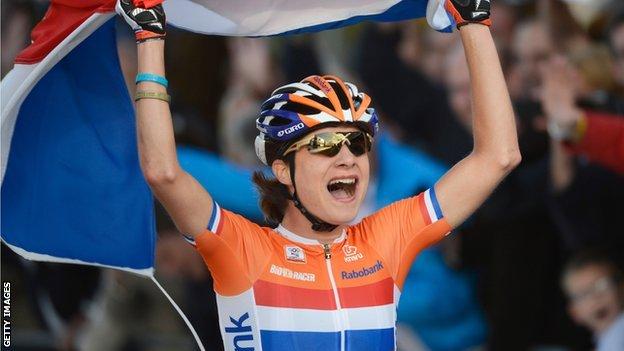 The 24-year-old, who said she would have to "ride out out of her skin" to win a medal, had been in contention for much of the race but fell away on the fourth of five hilly finishing circuits around Florence.

"It was just so hard, I will look back a little disappointed," Armitstead told British Cycling.

"If you were somebody that was going to attack you had no chance to do it early because the course did for us, it was just so difficult. It was all physical. I just blew up."

The race began to liven up on the first of the 16.5km laps, with several American riders setting a fierce pace on the first 4.3km climb to Fiesole, and Britain's two-time junior world champion Lucy Garner, riding in her first senior world road race at the age of 19, was among those to drop back.

The Americans, trying to set Evie Stevens up for the win, rode aggressively on the hill for the next three laps, helping to whittle the leading group down to eight riders.

However, their exertions meant they were only left with Stevens in that group, while Italy had 2009 champion Tatiana Guderzo, Ratto and Elisa Longo Borghini, the Dutch had Vos and Anna van der Breggen and Sweden were represented by world number one Johansson and Australia by Tiffany Cromwell.

Van Der Breggen, who sacrificed her own chances of victory to help Vos win in 2012, again worked hard to chase down attacks as the Italian riders, fearful of Vos's sprinting speed, tried to break the Dutchwomen on the final lap.

But it was on the final ascent of the 600m Via Salviati, with around 5km of the race remaining, that Vos made her decisive move.

The 2006 and 2012 champion, who was second in each of the five intervening races, raced clear on the steepest section of the hill - which had an average gradient of 10% - and although Johansson and Ratto set off in pursuit they could not catch Vos.

"It is hard to win one title but to defend one is really tough," she said. "The Italians made it a tough race. I was not too confident in the last lap but on the steep climb I saw an opportunity."

Vos was quick to thank Van Der Breggen for her help in closing down the breakaway attempts, adding: "She has been in fine form all season and she was the one we wanted to have in the finale to keep it together.

"She was here to react to every move and I could stay quiet."

Britain's 2013 Tour de France winner Chris Froome is among the favourites to win Sunday's men's race, which will be broadcast live in its entirety on the BBC Sport website from 09:00 BST, with television coverage starting at 14:15.