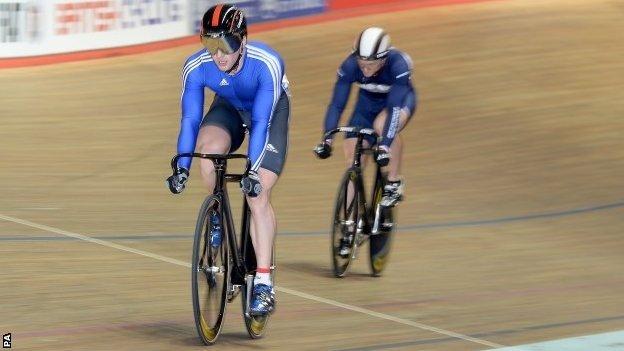 Kenny added to his keirin title by beating Peter Mitchell while Matthew Crampton defeated Craig MacLean in the bronze medal contest in Manchester.

Jess Varnish and Danielle Khan were victorious in the team sprint.

It was a third title of the week for Varnish after wins in the 500m time trial and women's sprint.

Kenny said: "It is the first race on wood because we have been training on concrete over the summer, so I was only just finding my feet towards the end of the night.

"But winning is a habit so let's hope we can carry it on through the World Cup. It is only going to get harder from here."

Hall, who won gold and silver as tandem pilot to Lora Turnham at the recent Para-cycling Road World Championships in Canada, was surprised to beat Trott and King.

"It is a bit of a shock really. I wasn't even going to ride, but my coach talked me into it," she said.

"I knew if it came down to the sprint that I couldn't beat Laura or Dani, so when I saw a couple of people go off the front I thought 'I have got to go with a do or die effort'."