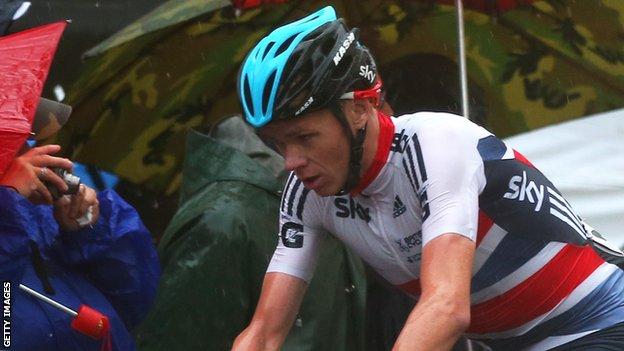 Britain's team manager Rod Ellingworth criticised the attitude of his riders after none finished the men's road race at the World Championships in Italy.

Asked if his riders lacked spirit, he said: "Yes, it may be that simple.

"A lot of people were talking the talk and didn't see it through. Each and every one of them underperformed."

Wiggins, 33, and former world champion Mark Cavendish, 28, were victims of a pile-up as heavy rain caused multiple crashes early in the 272.5km race.

Froome, attempting to become the first man in 24 years to win the Tour and world road race in the same year, pulled out with more than 80km remaining.

The 28-year-old's withdrawal meant Geraint Thomas was the only Briton left riding, but the Welshman, 27, also climbed off shortly afterwards.

"The lads are all disappointed in themselves and they are right to be disappointed," Ellingworth told BBC Sport after a race won by Portugal's Rui Costa.

"The lads have got to look at themselves. They're all full-time bike riders and if we're talking about going forward, talking about Rio 2016, this was a very disappointing result.

"They all got a bit too carried away too early, then the weather got to them for no reason. There are no excuses at all."