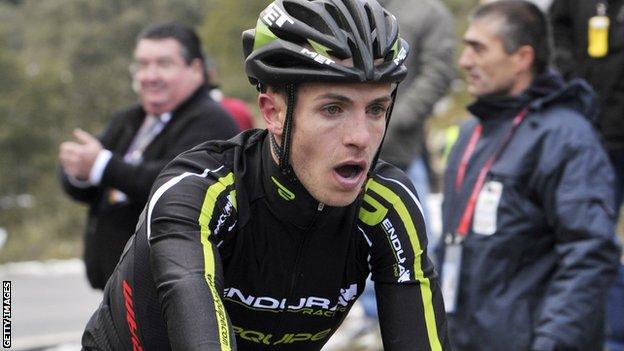 British cyclist Jonathan Tiernan-Locke wanted to undergo extra testing to counter rumours of performance-enhancing drug use after wins in 2012, his former team has said.

It emerged on Sunday that the Team Sky rider has been notified of a potential discrepancy in his biological passport.

He raced for Endura prior to joining Sky in October 2012.

Endura defended their anti-doping policy, one they stressed Tiernan-Locke has been fully compliant with.

They said in a statement: "Endura Racing's culture has always been entirely at odds with cheating in any form including the use of PEDs [Performance Enhancing Drugs] and nothing in Jonathan Tiernan-Locke's conduct during his 2012 season with the team gave rise to concerns that his approach was at odds with this in any way."

Tiernan-Locke enjoyed the best year of his career in 2012, winning the Tour Mediterraneen and Tour du Haut Var early in the season, before becoming the first British winner of the Tour of Britain in 19 years last September.

But a report in France raised doubts over his performances early in the season, prompting Endura and Tiernan-Locke to make a request to the International Cycling Union for the Devon rider to be put on a biological passport.

As a UCI Continental-level team, Endura were not part of the UCI's biological passport scheme.

"Endura, with the full support of Jonathan Tiernan-Locke, made a request to the UCI to be allowed to pay to have him put on a biological passport in order to counter the rumours of performance enhancing drugs that circulated after his wins in Tour Mediterraneen and Tour du Haut Var in 2012," the team added.

"However this request was refused by the UCI."

Endura also said that Tiernan-Locke was made available to both Team Garmin-Sharp and Team Sky in April and May last year - two teams who had shown interest in him - for physiological testing and no adverse results were reported.

They also added that irregularities in biological passport data can be caused by tiredness and ill health.

"At this early stage, without detailed information, it would be inappropriate to speculate on the reasons for inconsistencies in Jonathan Tiernan-Locke's biological passport data," Endura said.

"It is known that there are many possible legitimate causes including fatigue and ill-health, both of which we understand he has suffered from in the last year."