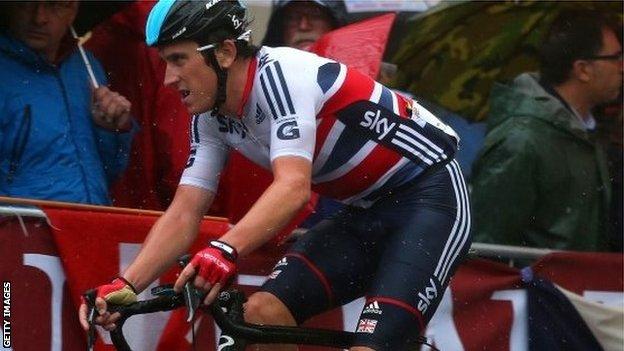 After last weekend's World Championships, I have got another big event to look forward to on Saturday - I am back in the UK for Mark Cavendish's wedding to Peta Todd.

And I think I can safely say that things will turn out happier when Cav ties the knot in London than they did for us in the road race in Florence last Sunday.

That was a very disappointing day for myself, Cav and the rest of the Great Britain team - and it was definitely not the way I wanted to end my season.

I am pretty glad my 2013 campaign is over to be honest. It was not my best year results-wise, or my luckiest.

I felt in great shape fitness-wise and my preparations were good but I had a few crashes in the big races that I was targeting, which put a bit of a downer on it.

What went wrong at the World Champs? Pretty much everything.

I was the team's road captain, which meant it was my job to make the call on tactics during the race - unlike in Grand Tours like the Tour de France, riders did not have radios to speak to the team cars and follow orders from the coaches.

But I did not really have to make any big tactical decisions because after 150km, I was the only British rider, of the eight who started the race, left racing.

Early on I had to tell Cav to slow down every now and again because he was getting super-excited and wanted to chase the riders who had gone off in a break.

And I did speak to Sir Bradley Wiggins after the descent down San Baronto (after 58km of the 272km race) because he went from the front to pretty much the back of the bunch.

Mentally he has got a bit of an issue about riding in the rain after crashing in this year's Giro d'Italia.

So I told him that, if he wanted to, he could do his work early on. Riding on the front of a race is easier than trying to fight in the wheels of a big bunch of riders when you have to deal with wet roads and tight corners.

He was about to do that, but then we hit some corners and nobody saw him again. I am still not sure what happened to him, because I did not see him afterwards.

As I explained in my BBC column before the race, we were there to try to deliver Chris Froome to the world title to go with his Tour de France victory.

He was not among the favourites but Britain being so successful in recent years meant expectations were still high.

Finishing was not a goal for me, because I was just there to do a job for Froomey, but for none of us to make it to the end was a massive disappointment.

The torrential rain meant conditions were awful but that is not an excuse, and the weather was actually something we thought might help us going into the race.

We thought Froomey was in better shape than it turned out he was and, when we had our team meeting the night before and talked tactics, he wanted a hard race.

And that was the plan we pretty much stuck to - which is why we had Cav and Luke Rowe setting the pace at the front at the start. Chris wanted to ride from the front and not be too stressed by being in the middle of the main bunch, especially if it was raining.

We did that up until the race started the 10 laps of Florence at the 106km mark but the rain was so heavy it made things even harder than we had anticipated.

Josh Edmondson crashed and Steve Cummings punctured as we got on to the circuit, which was pretty much the worst time it could happen because there were a couple of super-fast laps that caused the race to break up.

There were more crashes and one by one we dropped out. In fact, only 61 riders of the 208 who started the race crossed the finish line, although many, like me, drop out because that is part of their strategy.

Individually, none of us had a good day, and our head coach Rod Ellingworth was obviously pretty frustrated with how things turned out.

I have not read exactly what he told the media afterwards but, when he spoke to us, we did not get a rollicking or anything like that. That is not his style - I have known Rod since my junior days and he is more likely to give you the silent treatment if he is not happy.

We actually had a good chat amongst ourselves about what went wrong when it was just us riders on the bus back to the hotel, and then Rod went through the race with us afterwards.

It was good to get things out in the open and it was productive to identify the issues we had - it will definitely help in the future, and hopefully make sure that does not happen again.

But, whether I am racing for Britain or Team Sky, the coaches definitely do not just dish out criticism.

They are more concerned about not putting any pressure on you. If you have a bad day they will not stand you at the front of the bus and throw stones at you or anything like that.

There were two sides to my season. My main goals were the spring Classics, and I crashed in them.

Then the same thing happened on the first day of the Tour de France, when I broke my pelvis.

After missing the Tour in 2012 to focus on the track at the London Olympics, I felt strong and I was looking to step things up in the mountains but, overnight, it just became about surviving the race.

That was the worst moment of my year, but my best moment came in the same race.

To be part of the team that helped Froome win the Tour was an unbelievable feeling and us riding down the Champs Elysees together at the finish is something I will never forget.

Now I have got a couple of weeks off before I start my preparations for 2014, and what has happened to me in the last few months has made me hungrier for next year already.

Right now though, I am not thinking about my bike and I have got a different kind of appetite. It is nice to be able to go out for a meal and eat whatever I want for once - and have a few beers and some pudding.