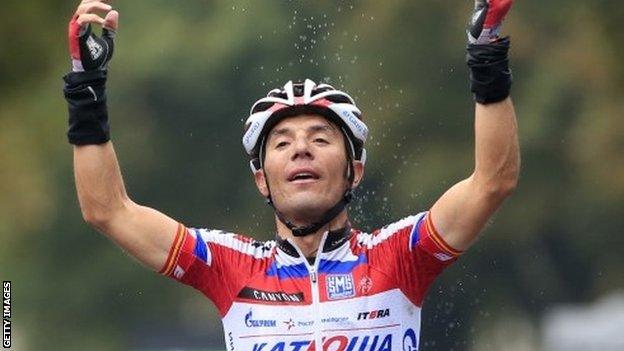 Spain's Joaquim Rodriguez rode away from the field to win the Tour of Lombardy for a second successive year.

The Katusha rider was beaten by a bike length into second by Rui Costa in last Sunday's World Championship road race.

But he made amends in the 242km race from Bergamo to Lecco in Italy and raced clear on the final climb of the day with around 10km left.

The one-day race is the final of the five prestigious 'Monuments' that are raced each year across Europe - the Milan-San Remo in Italy, Tour of Flanders and Liege-Bastogne-Liege in Belgium and Paris-Roubaix in France are the other four.

Only three riders have won all five monuments.

Tom Simpson is the only British rider to win the Tour of Lombardy, in 1965.

The 107th staging of the Classic race, known as the 'Race of the Falling Leaves' because it takes place in autumn, began in dry conditions but finished in the rain.

The wet weather accounted for home favourite Vincenzo Nibali, who was chasing a first win in the race but retired with a knee injury after being involved in a crash.

France's Thomas Voeckler was the first to make a solo bid for glory on the penultimate hill of of the day, the Madonna di Ghisallo.

He built a lead of around three minutes but several teams upped the pace ahead of the fifth and final ascent, Villa Vergano, and he was caught 11.5km from the finish line as the climbing specialists came to the fore.

Rodriguez, as he did last year, waited for the steepest section of the climb before making his decisive move and he opened up enough of a gap to ensure his second win in the race.

The victory moved Rodriguez ahead of Britain's Chris Froome, who missed the race, at the top of UCI World Tour rankings.