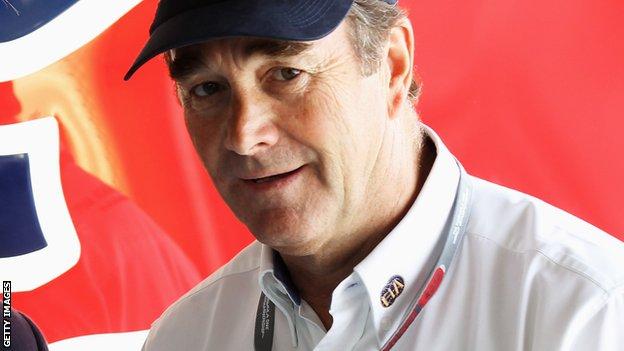 Team UK Youth owner Nigel Mansell is still "very upbeat" about the future of the team despite withdrawing his financial support for next season.

The ex-Formula 1 world champion funded the team for four years but has said continued sponsorship is "impossible in the present financial climate".

The outfit enjoyed a fine 2013 but now need to find a new headline sponsor by the end of October to survive.

Mansell - whose son Greg rides for the team - is working with other members of the Team UK Youth set-up to find new financial backing.

"The fantastic thing is that there's been a lot of response in the last few days," he added.

"We have two meetings next week and we're trying really hard to develop things. The problem is that having conversations is not the same thing as getting finance."

Mansell made his decision at the end of Team UK Youth's most successful ever season, with his outfit ranked second only to Team Sky among British teams in the UCI rankings after several race wins.

"It's a fantastic team and they've made history this season with some of the results," added Mansell.

"The stats are there to back up what I'm saying. We won the Tour Series, we have four riders ranked in the top 10 of the British rankings including Yanto Barker as the number-one-ranked rider, and we won UCI-ranked events in Ireland and elsewhere.

"Unfortunately, the reality check is that the figures needed to fund a team are significant.

"But with cycling's success in Britain with the Olympics and the Tour de France, surely there must be sponsors out there who want to get involved?

"The team's pedigree is as good as anybody out there and with the link with the UK Youth charity, they are also helping to inspire young people on to bigger and better things.

"We've had fantastic support from within the sport and have a great relationship with our partners and suppliers."

The team competes at UCI Continental level, the standard below that of Team Sky and has been used to promote the UK Youth charity, of which Mansell is president.

Mansell said that the team had told all 12 of its riders - which include Cornwall's Chris Opie, Devon's Barker and Joshua Hunt, Jersey's Richard Tanguy and Guernsey's Tobyn Horton - that they were free to find new contracts, with his blessing.

So far only one rider - Jon Mould - has done that, and Mansell said that was evidence of how "solid" the team remain as a unit.

"To a man, they say this is the best team they've ever ridden for and they want to stay here if they possibly can," he said.

"I'm still very, very upbeat that we can bring someone in to carry on this success story."

Team UK Youth manager Dave Povall also holds Mansell's belief the team could still have a future next season - and beyond.

"It's been a fantastic season - but we find ourselves in the position where we're the most successful domestic team which can hold its own at European level but is without a title sponsor, so it's very challenging times.

"Mr Mansell has been very clear and transparent at all stages, and he's still working remarkably hard to secure funding for the team to continue. His commitment is second to none and is mirrored by every member of the team."

Povall is involved in trying to find a new sponsor for the team, but he said the clock is ticking.

"Realistically we need to get something in situ by the end of the month for all parties to move forward and to give us enough time to fulfil our requirements," he said.