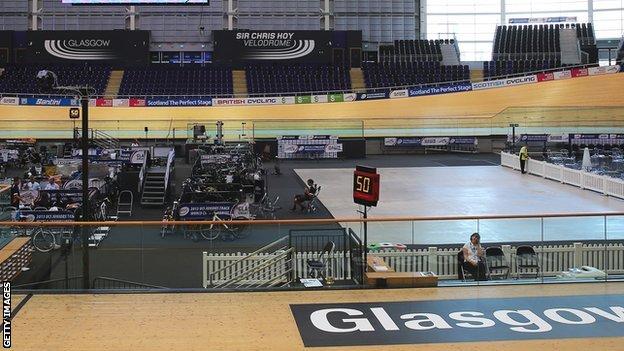 Edinburgh RC's Alison Chisholm and Eleanor Richardson won the women's team sprint in the third day of action at the Sir Chris Hoy Velodrome in Glasgow.

Baird had won the women's sprint and keirin earlier in the weekend.

On Friday evening, she had proved faster than Richardson and Louise Haston in the sprint and in a thrilling keirin final on Saturday night she produced a burst of energy to nip ahead of City of Edinburgh team-mates Davis and Haston, who won silver and bronze respectively.

The bronze medal went to Lulu Bartlett and Rebecca Dornan of The Racers.

For former runner Richardson, 27, it was a second gold medal. On Saturday she beat Baird to the Scottish 500m time trial title in 36.55, despite Baird posting a personal best of 36.68. Chisholm took the bronze.

Paul and Skinner had dominated the men's sprint races on Friday and Saturday and with Croall on Sunday they proved too strong for their west coast rivals, Glasgow Life Track Cycling Team's Kenny Ayre, Jonathan Biggin and Delhi Commonwealth Games athlete Chris Pritchard.

It was satisfying for Manchester-based Skinner as he had been unable to compete in the keirin final last year, crashing a few hours before the event and breaking his collarbone.

On day two of this year's championships, in the best-of-three sprint final, 20-year-old Paul won the first two exchanges with Skinner to retain his Scottish title, with Croall winning the bronze medal.

A fourth and final day of the championships takes place on Sunday 27 October, where the endurance riders take to the track to compete in the kilo, 2km pursuit, 3k pursuit and 4k pursuit.