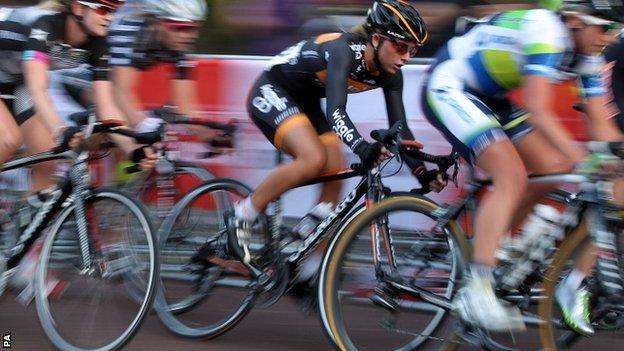 British Cycling says it is on course to achieve its target of getting one million more women cycling by 2020.

The Women's Cycling Strategy was launched in March by the sport's national governing body to build on interest following the London Olympics.

It says around 106,000 women have participated in programmes this year.

"There is also a real appetite for women to get into racing or to try personal challenge rides," said chief executive Ian Drake.

"In the six months since we launched our strategy, we've made some great progress and our plan to get one million more women cycling over the next seven years is firmly on track.

"So far this year, 24,000 women have taken part in British Cycling sportives and our female member base has increased by 19% since we launched our strategy."

Maria Miller, the secretary of state for culture, media and sport, said: "With great role models such as Laura Trott (pictured above) and Becky James, an increase in women's races, a Women's Tour announced and more female coaches coming through, the sport is in a great position to keep up this momentum."

Earlier this month, the women's Tour of Britain was given the same status as the men's race for its launch in 2014.

In its six-month update, British Cycling said 37,000 women have taken part in traffic-free cycle rides in 2013, adding that over a third of the total attendees were women.

Britain's Shanaze Reade, a three-time BMX world champion, said: "For too long, cycling has been seen as a sport for men. We're starting to close that gender gap."