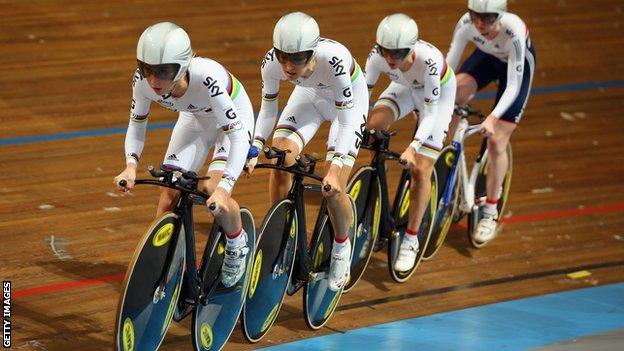 Great Britain have named seven Olympic gold medallists in their squad for the track World Cup meeting in Manchester.

All of the 17-strong party travelled to the European Championships last week, where Britain won three gold, two silver and three bronze medals.

London 2012 champions Dani King, Joanna Rowsell and Laura Trott are part of the women's endurance team, with Ed Clancy and Steven Burke in the men's squad.

Trott and King teamed with Elinor Barker and Katie Archibald in the Netherlands to win European gold, though Archibald will compete for her trade team in Manchester.

Trott followed that up with success in the women's omnium, while Clancy, Burke, Owain Doull and Andy Tennant won gold in the men's pursuit.

British Cycling performance manager Shane Sutton said: "We came home from the European Track Championships with three gold, two silver and three bronze medals, which has given us a solid start to the season.

"We'll be looking to build on that over the next couple of weeks, and I'm hoping to see some good performances across the board at the World Cup in Manchester.

"To compete at an event at our 'home' velodrome is always a big boost to the team and it's without a doubt our favourite venue to race at.

"All of the team are looking forward to racing with the support of a home crowd again."

Manchester is the first of three World Cup meetings, where riders and teams earn points for qualification to the 2014 World Championships in Cali, Colombia.