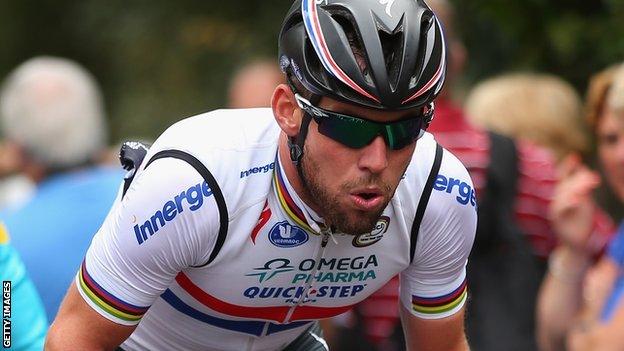 British cyclist Mark Cavendish says it was hard to hide his "frustration" in his final weeks at Team Sky.

In his autobiography At Speed, serialised in The Daily Telegraph, Cavendish says he felt let down during the 2012 Tour de France, won by his then team-mate Bradley Wiggins.

A winner of 25 Tour stages, the 28-year-old criticises Team Sky - who he left after last year's Tour of Britain - for "accepting compromises" and describes head team director Sean Yates as "uninspiring and miserly in praise".

"For all that I loved Brad [Wiggins], Chris Froome, Richie Porte, they were all wrapped up in their own world - with tunnel vision," he said.

The Manxman's tally of 23 stage wins at the time surpassed seven-time Tour winner Lance Armstrong and Frenchman Andre Darrigade and moved him into fourth in the overall stage-win standings, 11 short of Belgian Eddy Merckx's record of 34.

But in September 2012, he confirmed his desire for an "amicable" split as he looked for a team that would back his aim to win sprint stages and points jerseys - and joined Belgian team Omega Pharma-QuickStep at the start of the 2013 season.

"I understood and would never have disputed that the yellow jersey should be our priority," Cavendish added. "But I had been under the impression that 'believing in better' was about big ambitions and felt sad that we were already accepting compromises."

He originally joined Sky on a three-year deal after the HTC-Highroad team disbanded at the end of the 2011 season.

At HTC, Cavendish was the team leader and had claimed 20 Tour de France stage victories prior to the 2012 season - but while at Sky he was overshadowed by Wiggins.

He said he continued to do his best, but added "it was sometimes hard to reconcile my own frustration with the team's rampant success".

Cavendish also said he was "under the spell of Lance Armstrong" - the American who won seven Tour de France titles before being stripped of them all and banned for life for doping - describing him as "mesmeric" to be around during his career.