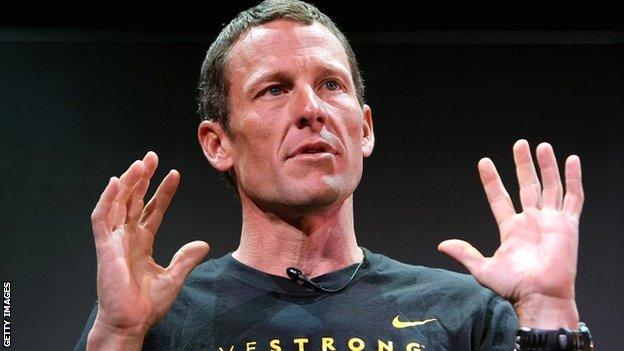 Disgraced former cyclist Lance Armstrong has told the BBC he will testify with "100% transparency and honesty" at any future inquiry into doping.

But the American, 42, wants assurances he will be treated fairly after admitting in January he took performance-enhancing drugs during all seven of his Tour de France wins.

I have experienced massive personal loss, massive loss of wealth, while others have truly capitalised on this story

He argues some of those involved in cycling's culture of doping have been given "a total free pass", while others have received "the death penalty".

Accused by the United States Anti-Doping Agency of conducting "the most sophisticated, professionalised and successful doping programme sport has ever seen", Armstrong was stripped of his Tour de France titles in August 2012.

The Texan, who overcame cancer before the first of his seven successive Tour "wins" in 1999, also handed back the bronze medal he won in the road time trial at the 2000 Olympics in Sydney.

In a 20-minute interview with the BBC's World Service's Newshour programme, Armstrong said his life had "been tough" following his high-profile television confession to American chat show host Oprah Winfrey at the start of the year.

He also spoke of the mounting threat to his vast fortune, reported to be about $125m (£78m) at its peak, as people seek redress for the lies he told.

"It's been tough," he said. "It's been real tough. I've paid a high price in terms of my standing within the sport, my reputation, certainly financially because the lawsuits have continued to pile up.

"I have experienced massive personal loss, massive loss of wealth, while others have truly capitalised on this story."

Asked if he regretted doing the interview with Winfrey, he responded: "I was going to have to answer the questions anyway.

"There were plenty of lawsuits in place that would have put me in the cross-hairs."

Armstrong said what he wanted now was consistency from those attempting to find out the true extent of the doping.

Brian Cookson, the new president of the UCI - cycling's world governing body, said there will be an independent commission to try to unearth how much cheating there had been.

The Englishman is keen the commission hears evidence from a large number of people, not just Armstrong, as he attempts to restore cycling's credibility and that of his own organisation, which has faced allegations of corruption.

Armstrong said he would do whatever he could to "close the chapter and move things forward", conceding he did not have "a whole lot of credibility" but also insisting he had "nothing to lose".

He has previously questioned the role of the UCI, claiming "there were things that were a little shady" at the time.

However, he told the BBC any revelations might not be "quite as juicy" as people think.

Armstrong, who finally retired from cycling in 2011 after initially quitting in 2005, also issued a warning about the inquiry itself, arguing the logistics would be problematic both "legally and internationally".

He also questioned how much good attempting to find out the truth would do.

"Do I think that this process has been good for cycling?" he asked. "No. I don't think our sport has been served well by going back 15 years.

I don't think that any sport, or any political scenario, is well served going back 15 years. And if you go back 15 years, you might as well go back 30

"I don't think that any sport, or any political scenario, is well served going back 15 years. And if you go back 15 years, you might as well go back 30."

As for whether cycling is clean now, Armstrong insisted he had "no idea".

However, he argued that "performance enhancement" has been around since the ancient Greeks and there would "always be some form of it", adding the World Anti-Doping Agency had a "hard" job keeping up with the cheats "because of the development of pharmaceuticals".

Armstrong would not be drawn on whether it was time for a radical approach to drugs in sport, perhaps permitting thresholds rather than outright bans.