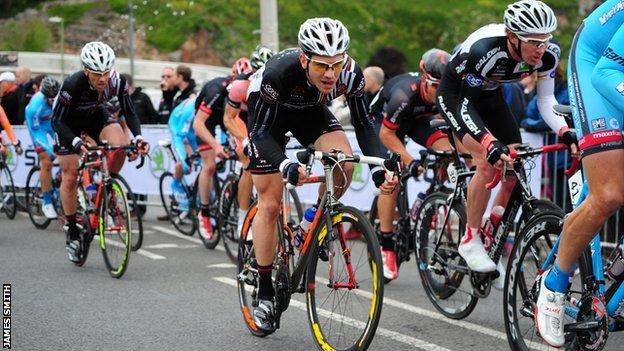 Plymouth-based cycling team Starley Primal have set their sights on a step up in performance when they switch to full-time professionalism next season.

The team have been going for three years on a "shoestring", according to team principal James Smith.

But the 2014 season will see a full men's and women's team in action with a "decent budget" behind them.

"We'd like to be one of the most competitive British teams next season," Smith told BBC South West Sport.

"And we're well-placed to do that. We did the complete Tour Series [one of the premier events on the domestic calendar] last season and came 10th out of 10 teams but it was a good opportunity for us to dip our toes in at the highest level - and it was a great learning curve for us to know what we need to move forward.

"We now compete at the highest domestic level and our targets are for the men's team to finish in the top five for the Tour Series, and for the women's team we'd like to be competitive in the Tour of Britain - just to be in it will be a good start.

"The riders just need to turn up and ride, they don't need to worry about how to get there or who's paying for the hotel and the petrol. When riders have to worry about things like that their performance will dip and that's something I learnt last year."

Cycling in Britain is a sport on the up, with high-profile success on the Olympic and Tour de France stage making household names of some of the sport's leading stars Sir Bradley Wiggins, Mark Cavendish and Chris Froome.

But the recent demise of Team UK Youth, a British outfit which enjoyed a superb 2013 season but folded after team owner Nigel Mansell withdrew his funding, was a warning that the sport remains a harsh competitive environment.

"It's almost impossible to get a team off the ground, but we're lucky in the UK in that cycling is no longer a minority sport," added Smith, who praised Team UK Youth for "raising the bar" on the domestic scene.

"You might not see a bike race going past your front door every day but there are so many people racing every weekend across the country.

"I've learned a lot in three years of doing this on a shoestring I think last year we did the whole Tour Series for just less than £8,000 - including all the riders and everything. We basically begged, borrowed and stole to get ourselves in a position to compete, but this year we have a decent cash budget."

Smith said the Plymouth identity would be a key feature of the team.

"It's going to be massively important to this team," said Smith.

"The sponsors are largely Plymouth-based. I did 21 years in the navy based in Plymouth and even though we have some riders from all over the country, for me it's vital that the identity of the team remains centred on Plymouth and that we can fly the Devon flag.

"The majority of the riders in the men's team are from the south west and our feeder club is based in Plymouth. There's not much more we can do to be Plymouth-based than we are."