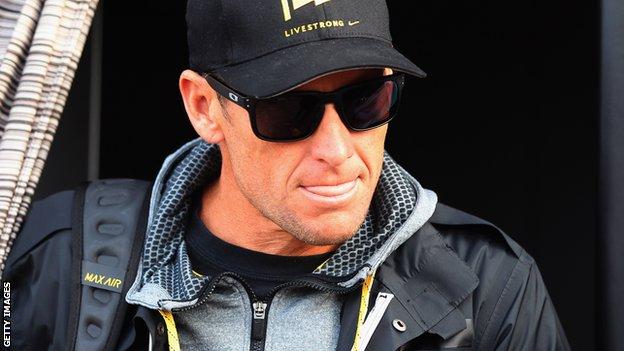 Lance Armstrong has met and apologised to the woman who first accused the disgraced former cyclist of doping.

The 42-year-old was stripped of his seven Tour de France wins and confessed in January to taking performance-enhancing drugs during his career.

I wanted to eyeball him. You can't keep kicking an injured dog. I wasn't here to humiliate him. But I wanted closure

Until then, he had denied doping, taking legal action against and attempting to ruin the reputation of former team member Emma O'Reilly.

Armstrong admitted what he did was "inexcusable" and "embarrassing".

O'Reilly, who worked as Armstrong's soigneur, had spoken out about his drug-taking in 2004.

Armstrong told the Daily Mail: "At the time, when I said what I said about her, I was fighting to protect a lot of positions."

In August 2012, the American was stripped of his seven Tour de France titles and accused by the United States Anti-Doping Agency of the "most sophisticated, professionalised and successful doping programme sport has ever seen".

Then in January he confessed in a television interview with chatshow host Oprah Winfrey that he had taken performance-enhancing drugs.

He also admitted he had "run over" a lot of people in an attempt to keep his doping a secret.

"I never expected to see Emma," he added. "I wanted to talk to her.

"I felt it was necessary to have a conversation because there were definitely people that got caught up in this story who deserved an apology from me.

"When I reached out in January it was to talk. Emma, I appreciate, wasn't ready for that. But it's good that we are doing this in person."

Armstrong and O'Reilly, originally from Dublin but now living in Cheshire, met recently in Florida.

"It was too big a situation to just have a chat about it on the phone," said O'Reilly, 43. "I wanted to eyeball him. You can't keep kicking an injured dog. I wasn't here to humiliate him. But I wanted closure."

Of the meeting, O'Reilly said: "It was a bit stilted because I guess we were two people who hadn't talked for a long time, who had more than a bit of history. But we had a chat about people we knew, about our families.

"I was thinking, he never actually used the word 'sorry'. But I wasn't looking for an insincere apology. There are different ways of saying sorry and I felt what he did say was genuine.

"But there are wider issues here and I wanted to address those, too. That said, I wanted closure with him and I feel I have it."