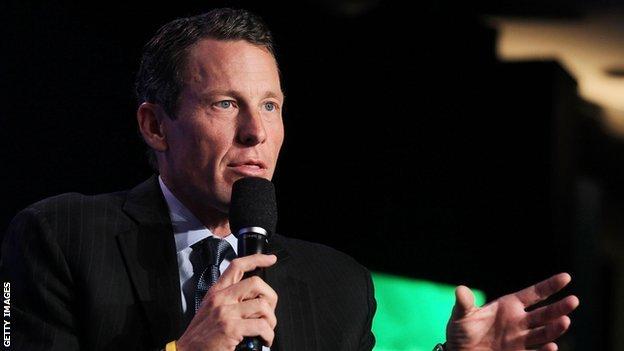 Former cyclist Lance Armstrong has settled a lawsuit brought by an insurance company that paid him $3m (£1.9m) for successes while doping.

The American was stripped of his seven Tour de France titles before admitting he took performance-enhancing drugs.

Nebraska-based Acceptance Insurance said the Texan's drug use meant their policy with him was void.

He is being sued for sponsorship money that his US Postal team received from 1998 to 2004.

The US Justice Department, which paid his team about $40m through its postal service sponsorship, announced in February it would join the 2010 'whistleblowing' lawsuit filed by ex-US Postal rider Floyd Landis, who himself admitted using drugs throughout his career.

A federal judge is expected to rule on Armstrong's request to dismiss that suit in the next 30 days.

The disgraced cyclist's settlement with Acceptance Insurance comes a day before he was due to give sworn testimony in court over that case.

He was banned for life by the United States Anti-Doping Agency in August 2012 and stripped of the seven Tour de France titles he won between 1999 and 2005.

Armstrong, who also had to return the time-trial bronze medal he won at the 2000 Olympics after his confession to television host Oprah Winfrey in January, was reported to be worth $125m (£78m) earlier this year.

Last week he told the BBC he would testify with "100% transparency and honesty" at any future inquiry into doping.