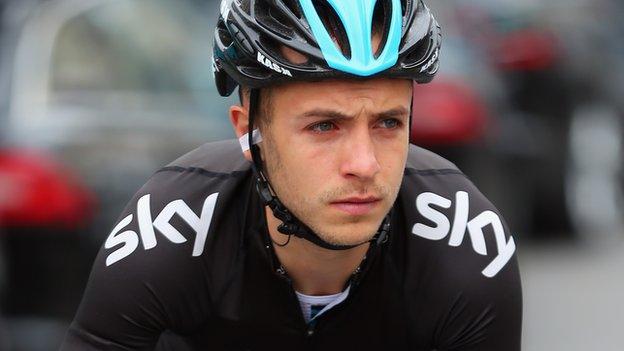 The Briton pulled out of the 2013 World Championships in September after being asked to explain his results by the International Cycling Union (UCI).

Team Sky said at the time the readings were "taken before he signed" in 2012 - a stance they repeated on Tuesday.

The 28-year-old 2012 Tour of Britain winner denies any wrong-doing.

"Mr Tiernan-Locke vehemently denies the charges brought against him and has informed the UCI that he fully intends to contest them," read a statement from the Devon-based rider's management company.

In its separate statement, Team Sky continued: "We understand that the violation was highlighted by an anomaly in his biological passport, in a reading taken before he signed for this team.

"There are no doubts about his approach or performance in Team Sky. This is a team that trains, races and wins clean.

"Jonathan Tiernan-Locke will not ride for Team Sky or take part in any team activities - including training camps and all team duties - until a decision is made in this disciplinary hearing process."

The UCI confirmed the news in a statement, adding: "In compliance with the UCI Anti-Doping Rules, the UCI has requested his National Federation (British Cycling) to initiate disciplinary proceedings."

News that cycling's governing body believes Tiernan-Locke has a doping case to answer will come as a crushing blow to the rider, who has endured a difficult first year in the big leagues, but will also ruin Team Sky's Christmas.

It is inevitable now that fresh questions will be asked of the credibility of its "zero tolerance" stance on doping. And coming so soon after the embarrassment of hiring controversial doctor Geert Leinders, the team's recruitment practices will also be scrutinised.

A British Cycling spokesman said: "British Cycling can confirm that it has been asked by the UCI to begin proceedings against Jonathan Tiernan-Locke based on an analysis of his biological passport.

"As with any other doping violation charge, those proceedings will be managed independently of British Cycling by UK Anti-Doping."

UK Anti-Doping director of legal Graham Arthur said in a statement: "We are progressing a case relating to a possible anti-doping rule violation.

"The matter is subject to confidentiality restrictions imposed by the anti-doping rules, and as such we are unable to comment further."

A cyclist's biological passport is an electronic record in which the results of all doping tests over a period of time are collated.

It contains the results of an individual's urine and blood tests.

In September of 2012 he became the first British rider since 1993 to win the Tour of Britain.

"I'm 100% behind him," Endura team manager Brian Smith told BBC Radio 5 live. "He's not a doper. Endura racing was a no doping stance and as far as I'm concerned he was true to his word.

"Throughout the Tour of Britain he was urine tested every day and a blood booster would have shown up, so it doesn't make sense."