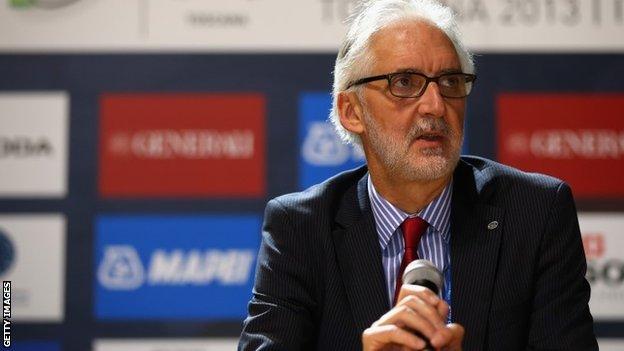 A war crimes investigator is among the three-man independent commission tasked with investigating doping in cycling.

International Cycling Union (UCI) president Brian Cookson said there will also be a Swiss politician and German anti-doping expert on the panel.

Cookson, 62, is hoping to rid the sport of its doping image and restore trust.

I want our sport to be one in which everyone - fans, participants, media, sponsors, governments - can have the utmost trust and confidence

He added the UCI are talking to the World Anti-Doping Agency (Wada) about "how best to incentivise people to cooperate" with the commission.

It comes after Lance Armstrong was stripped of his seven Tour de France titles and banned from cycling for life in October 2012 when found guilty of doping.

Armstrong, 42, had told the BBC he would reveal more about his past as a drugs cheat, but only if he was treated fairly by those investigating cycling's doping culture.

The American also said Hein Verbruggen, the former head of world cycling, knew he was doping and helped cover it up, although Verbruggen denies the claim.

He said the independent commission "will soon" be given access to the UCI's files and all of the related electronic data, with the commission aiming to complete their work this year.

"My vision is simple," said Cookson. "I want us to be the best international federation in the world, a federation that merits its beautiful and enduring sport.

"I want our sport to be one in which everyone - fans, participants, media, sponsors, governments - can have the utmost trust and confidence."

The panel will be headed by Dick Marty as chairman. He is a Swiss politician and former state prosecutor, a post which saw him focus on fighting organised crime and drug abuse.

Marty will be joined by German Ulrich Haas, who is a specialist in anti-doping rules and procedures and a highly respected arbitrator for the Court of Arbitration for Sport (Cas).

Australian Peter Nicholson, a former military officer who specialises in criminal investigations in both national and international jurisdictions, completes the panel.

He has worked with various governments and the United Nations where he has led several war crimes investigations.